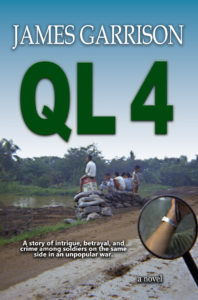 QL 4
by James Garrison
TouchPoint Press
reviewed by Rebecca L. Morgan
“‘The worst times to get killed are right after you get here and right before you leave.’ He rolled his eyes toward heaven. ‘And all the days in between.'”

Private First Class Justin Bell is drafted into the Vietnam War while pursuing his graduate degree and is assigned to Military Police patrol where he observes a corruption far beyond the combat he was anticipating. Distraught by the crime and injustice he repeatedly witnesses, he quickly becomes disillusioned by the military and the war effort. Ill at ease in his surroundings and assignments, he doesn’t know whom to trust and begins to question everyone’s motives as any form of stability he previously sensed crumbles. He uncovers a trail of deception that links to a highly profitable black market, and crossing paths with those involved can prove deadly. As the disturbances mount, his morality can no longer allow him to remain silent. Bell struggles to find a resolution to his discontent as he evaluates his own responsibility in the occurring exploits.

The magnitude of how one choice impacts all proceeding outcomes is the essential premise of this wartime novel. Each character in the story faces a distinctive situation in which the decision-making process is amplified by the ability to survive under chaotic and life-threatening circumstances. The author depicts the Vietnam landscape and cultural environment in expert detail, creating an ominous backdrop that serves as an overture to the arduous missions of the American servicemen and personnel. QL 4, the highway that runs from Saigon into the Mekong Delta, plays an integral role in the novel, exposing a harsh imbalance between the violence and the undeveloped terrain. Readers of historical fiction, military, and crime novels will be intrigued by the author’s organized plot that continually forms heightened suspense as the characters reveal their intent, configuring an unpredictable climax and a haunting conclusion to the Vietnam experience.

MWSA Review
This is the fictionalized story of the author’s year as a drafted MP in Vietnam during the war.  The story moves forward in a vaguely chronological pace, but the chapters focus on one individual at a time whose name is in the chapter title.  Everything that went wrong on bases throughout Vietnam is described as all happening at this small base, and the young MP observes hints of problems while being unsure who can be trusted among his superiors. He comes to realize that the illegal activities involve people in town and in the ranks of their counterparts in the South Vietnamese Army, and he questions the deaths of those who may have become aware of the problems.  His duties range from mind-numbing gate guard duties to patrols in town that can be dangerous to crowd-control during a riot.  Underlying the story of relationships during the Vietnam war are the cultural tensions between some Americans and the native Vietnamese as well as between black and white American soldiers and between the more and less educated soldiers.

While the extreme foul language is off-putting at first, the reader is drawn into the story as it develops.  The main character, SPF4 Bell, has completed one year of law school before being drafted.  Not only is he unhappy to be in Vietnam because he does not support the war, but the regular army members (referred to as lifers by Bell) are not impressed with college boys who do not know how to fight or police.  Bell and his fellow “new guys” have had only 8 weeks of training and arrive to find that they will learn their new duties “on the job” while patrolling with experienced army regulars who may or may not be trustworthy.  Some of these senior soldiers are biased against the native people, blacks, Jews, and the more educated.  Some are trigger happy – especially when drunk, which is frequently.  Bell becomes more and more curious and, of course, gets into more and more trouble while sometimes being surprised about the support he receives.
Reviewed by Nancy Kauffman, MWSA Reviewer

Author’s Synopsis:
PFC Justin Bell, a newly-minted U.S. Army MP, quickly discovers that there’s more than a war going on along QL 4, the main road from Saigon into the Mekong Delta. It’s old-fashioned crime and corruption. He doesn’t want to get involved, just serve out his time and go home, but life for an American MP in Vietnam in 1970 doesn’t work that way. QL 4 leads Bell deep into a swamp of deception, mayhem, and death that insinuates its way both into towns the MPs patrol each day and into the old French villa where they live.

QL 4 is a most realistic story from an author who experienced the Mekong Delta of Vietnam, 1969 – 1970 first hand. So much of what happened during that time in history we cannot imagine happening today. The war was not about anything but money and greed that was twisted to sound like we were going to save the South Vietnamese from implosion and assimilation. We did our best; gave our all. So many of our boys died for political and monetary gain. God bless them and God bless the USA