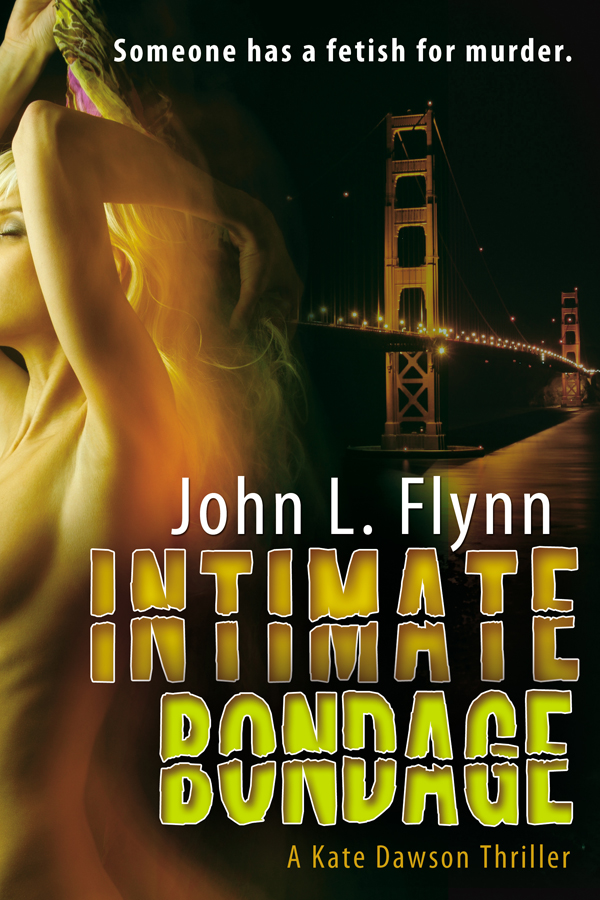 While I was reading the last book in the 50 Shades of Grey trilogy, truly hungering for more, my girlfriend told me about a book her reader’s group had read over the summer and liked far better. It was Intimate Bondage by John Flynn. The name sounded very familiar, and that’s when I recalled John Flynn is the name of the psychologist that Christian Grey sees in 50 Shades of Grey. Coincidence? When I read Dr. Flynn’s biography at the back of Intimate Bondage, I was intrigued to learn that Flynn is also a psychologist. That was all I needed to know!

I started Intimate Bondage right after I finished 50 Shades Freed. Kate Dawson is the central character. She is a police detective in San Francisco who has had her share of bad fortune. Both she and her black partner Frank Miller, who is soon to retire from the SFPD, need a big win, and in their next case, they are plunged right into the “Angel of Death” serial killings. A female serial killer with a fetish for murder is using San Francisco’s BDSM community to stalk her victims. Enter John Monroe, a psychologist who enjoys playing mind games and is an expert at BDSM. Kate meets him and immediately falls under his spell, much like Anastasia falls for Grey. But of course it’s the worst of all possible times for Kate to fall in love. Soon all three are chasing shadows and stumbling over bodies. There are so many twists and turns that you will be reminded of an Alfred Hitchcock thriller. I read the book in a couple of sittings, and I just could not put it down. The romance and intrigue and sex are all there, handled with the skill and professionalism of a real author, not an amateur like James.

Intimate Bondage is not a 50 Shades clone! It has excellent characters, including a Looney-Toon neighbor as the book’s comic relief. In fact, I would say the two books are clearly like night and day. I struggled with E.L. James’ writing, which seemed so stilted and amateurish that often I just wanted to put it down. But John Flynn’s writing was crisp, articulate, descriptive. He writes dialogue that sounds like the script for a movie. 50 Shades of Grey has no real plot to it, while Intimate Bondage follows a female detective on the trail of a serial killer into the underground world of BDSM in San Francisco. You’ll be guessing, following the clues, and falling in love until the last page. James writes sex scenes as if they were clinical exercises in bondage and discipline for a coffee table book, while I just loved the romance and sex that flows from Flynn’s story very naturally. I won’t spoil it for you but there is a really hot scene midway through Intimate Bondage that left me really hot and bothered. You’ll know the one.

My girlfriend and her reader’s group were right! Intimate Bondage is way better than 50 Shades of Grey! I noted from the book that there are supposed to be a series of Kate Dawson mysteries, and the next one is titled Intimate Disclosure. I can’t wait for it to come out! I’ll read everything Flynn writes because he has struck the right balance between excellent writing and a superb mystery with truly memorable characters.

I’m still not sure who this John Flynn is, however. I am wondering if the real author is simply using the psychologist’s name from 50 Shades as a pseudonym to make the obvious connection, or if Dr. Flynn is a real, live person. If so, I loved the romance and the story of Intimate Bondage. I’ll lay on his psychologist’s couch any day of the week.

A real page-turner (or screen swiper),

A Great Book on Par with Silence of the Lambs! A Real Cracker-Jack mystery, complete with a surprise,

I own a bookstore, and I love books. It doesn’t matter if they’re sci-fi, horror, romance, fantasy, or mystery novels. I read nearly everything that comes out, so that I can recommend good books to my customers. Intimate Bondage is a great book! I recommend it heartily to my customers. It has the perfect blend of excellent writing, interesting, well-drawn characters, a cracker-jack mystery (with the secret surprise inside), and the fun, old-fashioned thrills and frights of an amusement park (in the form of San Francisco, equally a character in the piece). Are there elements of   50 Shades of Grey, which I refuse to recommend to customers because of the poor writing, the answer is “yes” and “no.” On the surface, both books are about the world of BDSM, but while   50 Shades of Grey is about the seduction of an innocent, Intimate Bondage is a murder mystery that just so happens to feature a seduction… The seduction of a female police detective by a devilishly-handsome and clever psychologist who knows a lot more than he is willing to reveal. Think Clarice Starling and Dr. Lecter from Silence of the Lambs, not Anastasia and Christian Grey.

When we first meet Kate Dawson, she is at the bottom of the barrel. Her expensive car has been repossessed; she dresses in Versace clothes she cannot afford, shops at the flea market for knock-off jewelry, and lives in a flat furnished with used flea-ridden furniture from Goodwill. She recently lost her daughter in a senseless killing, and is maxed out both personally and professionally. The only further down is the grave, and she almost winds up there several times. We all know people just like Kate, and we can all sympathize with her struggle to stay sober and do her job well. Like many addicted gamblers, she keeps tossing the dice, looking for a metaphorical win. We can understand how she falls so easily for the good-looking psychology professor who casts a spell on her. She wants love and acceptance, and she wants it right now. Her hapless neighbor Lenny, a fan boy, wants to slip it to her, and it’s truly comical how many times this guy tries and fails. She wants a real man, and is willing to bind herself intimately to Professor Monroe, an avowed expert on BDSM. They play this lovely game of hide and seek, while the serial killer Kate is pursuing has both of them and Kate’s partner Frank Miller literally in the cross-hairs. Frank Miller is an outstanding character himself. A veteran of the SFPD who has found little in the way of promotions over the years because he’s black. Morgan Freeman would make an excellent Frank Miller, if Hollywood stops its obsession with 50 Shades of Grey and makes a truly complex story like this one.

The mystery in the novel is complex, and in order for Kate Dawson to find the serial killer who is targeting victims in the BDSM world, she has to strip herself of the tough homicide detective and become the Professor’s submissive, ready to surrender for love. This is the kind of story that Brian DePalma and Alfred Hitchcock used to make. One that is multi-layered with shifting allegiances. In fact, I am mostly reminded of the movies Dressed to Kill and Vertigo. I used to eat Cracker Jack when I went to the movies years ago, and at the bottom of the box was a real surprise. Well, Intimate Bondage is just like a box of Cracker Jack. Lots of good eating…and just when you think the box is empty, a great surprise. And believe me, the prize at the bottom of the box is worth the price of this read.

And finally, let me comment about the amusement park aspect of the novel. Flynn captures the streets of San Francisco like a native. The city has never looked so thrilling and dangerous, and is indeed a real character in the piece. In fact, I cannot imagine the story taking place in any other location. The author exploits the city in such an expert way that you’ll never look at Coit Tower or the riverfront in the same way again after reading this novel. Things not only jump out at you, and say “boo,” but you’ll also be ready to jump on the rollercoaster again and take it out for another ride.

The writing in this book is also exceptional. According to his bio, Dr. Flynn is a college professor who has taught creative writing and psychology. I compare the book favorably to a great screenplay, and in fact am reminded how cinematic the work is. John has taken a lot of time to get not only the characters right but also the descriptions right as well. You want a good read that you’ll go back to, again and again, then I highly recommend Intimate Bondage.

When the lights go down in the city…

When I read Intimate Bondage, I pictured Kate Dawson as a contemporary Angie Dickinson from Police Woman. She is tough and savvy, yet has her own vulnerabilities. She is “real.” You root and scream throughout the book. When I read the last word, I was breathless. More! More! This has to be a series.

I enjoyed the beautiful descriptions of San Francisco and the history of some of the buildings and landmarks described in this book. I felt that I was on a tour of the city with a knowledgeable guide, a guide who knows every nook and cranny of the city and the histories of every prominent person who was ever associated with those famous buildings. I learned about the works of Dashiell Hammett and his most famous book, The Maltese Falcon, and the movie of that book, starring Humphrey Bogart. What I didn’t learn nearly enough about was Kate Dawson.

I wanted to read this book because Kate Dawson sounded like a fascinating character; a full, complete and sympathetic modern woman. Her backstory is tragic. Her daughter was murdered several years prior to this story by her ex-husband, an event that I felt should have been explored and explained in more depth, but there was little said about it except vague references to her meltdown following the event. I never felt the depth of emotional pain she must have experienced. What I saw, instead, was a woman who owned an expensive BMW that she can’t afford (it’s in the financial company’s impound yard more than it’s in her possession), wears Versace, lives in a fairly high-end neighborhood and has thrift store furniture. I never felt that there was any motive for her odd, and in my opinion, irresponsible, behavior.

I thought the most interesting character in the book was Kate’s partner, Frank Miller. Frank, a 62 year old black man who had been on the SFPD for 40 years, had several lengthy dialogues about the difficulties and discrimination against black officers in the department and the city. While they were interesting and disturbing, they had no real purpose in progressing the story aside from making it clear that police and city politics were inherently unfair and prejudicial. The strangest character in this story is Lenny, Kate’s stalker and neighbor. Maybe he was intended as comedic relief. He has a lot of page time that I felt could have been used to explain Kate’s obsession with expensive things she can’t afford.

The final scenes of this book should have been emotionally draining. They weren’t. The ending was predictable. The perpetrator of these really awful crimes was evident from fairly early in the story.

There are some beautifully written passages in this book showcasing the talent of what is, undoubtedly, a talented writer. But my lack of an emotional connection to the main character, Kate, along with a convoluted plot and no clear motivation from any of the characters just left me feeling kind of flat. Hopefully the next reader will feel differently. I don’t think I will be following any more adventures featuring Kate Dawson.