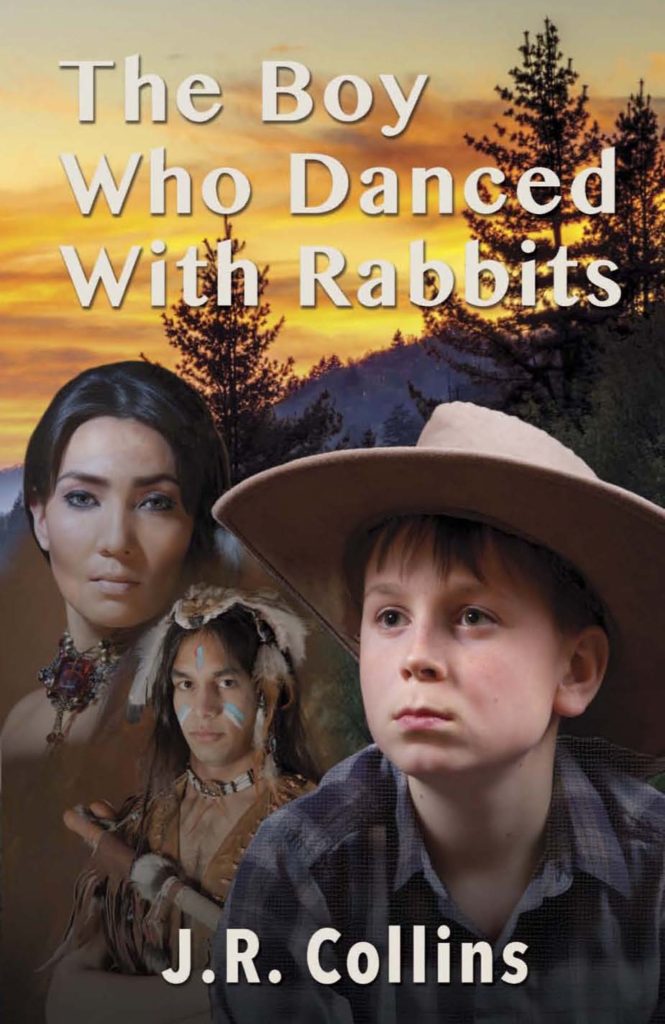 Many of you know that I am an avid reader. At night before I go to sleep I especially like to read Christian novels. Today I want to recommend one that I think you will enjoy, especially since you know the novelist. We have several accomplished authors in our church family such as Leah Adams, Nancy Carter, and Doris Durbin. This gentleman is our most recent novelist. I am speaking of our own J. R. Collins.

Writing with an acute insight into the history and culture of his chosen time, Joe has captured the essence of life for the early settlers and Native Americans in our beloved Choestoe Valley. “Choestoe” is a Cherokee phrase that means, “dancing rabbits” and speaks of the abundance of small game in the valley.

An intricate mixture of tradition, history and fiction, The Boy Who Danced with Rabbits is a joy to read. Joe has captured the time, the language, and the society of the early white settlers as they mingled life and faith with the Cherokee.

From the stories that were handed down to Joe from generations of our best local storytellers, he has blended an engaging tale of a boy named Jeb growing up in the early days of our nation. History tells us that many Cherokee fought alongside Gen. George Washington in the Revolutionary War. Some of their decedents lived in the North Georgia area we now call home. One was Jeb’s best friend Wolf. These families, though different in culture, were united in the common bonds of survival and faith.

Jeb and Wolf were born the same night in different parts of Choestoe. Their fathers were as near blood brothers as a white man and a Cherokee could be. Their lives are intricately intertwined and their adventures keep you awake turning pages.

I think books like this should be required reading for all those who move into our beloved mountains. It captures the ethics and sense of morality that have been instilled for generations in our families. Part of what new folks find so charming about Blairsville and Union County are the actual values that have been handed down by our forefathers. The importance of family, the sense of community, the respect for the environment, the welcoming nature of the folks, the love of adventure, loyalty, commitment and the overall positive attitude that exudes in our community are all principles that are the essentials of life in Joe’s book and in the lives of our ancestors in this land we love.

You can sense the source of these and many other roots of our mountain heritage in this heartwarming tale of a boy coming into adulthood. If you like an adventure novel that is also a love story, mixed with growing faith and emerging manhood, you will enjoy Joe’s first book, The Boy Who Danced with Rabbits.

Having lived most of my life in Georgia, The Boy Who Danced with Rabbits became near and dear to my heart. Knowing what was done to the Native Americans, it was refreshing to read of friendship, co-dependence, and loyalty between the white settlers in the North Georgia Mountains and the Cherokee. Collins’ nailed the mountain dialect and the ways of the people. His description of the Cherokee way of life and need for peace made me want to live in that era. Fantastic book! Can’t wait for the sequel!

The Boy Who Danced with Rabbits (A Book Review)

“Choestoe.” “A Dancing Place of Rabbits.”

Each time I hear the musical word, “Choestoe” I think “home” and I grow nostalgic and filled with memories.

Pronounced Cho-e-sto-e (with long o and long e) it means home to me. The place where I was born. The valley and place with that musical name lies along the upper Notla (sometimes spelled Nottely) River “between the Blood and the Bald” (the highest and next to highest mountains in Georgia). A beautiful place, home to the 20th Century Georgia poet Byron Herbert Reece, whose poem “Choestoe” was published in The Prairie Schooner magazine, Spring, 1944, and helped to make our valley, the Cherokee-named “place where rabbits dance” known far beyond the peaceful valley many of us know as home.

Now, in 2016, a just-released book entitled The Boy Who Danced with Rabbits by J. R. Collins revisits in imagination that valley as it was when the first settlers came, while the Indians still lived there. J. R. Collins, known to me and other folks in Choestoe as Joe Collins, is of the same ancestral line as I am. We both descend from Thompson and Celia Self Collins, among the first settlers to Choestoe Valley. The Collins family was there when Union County was formed in 1832 from that great north Georgia portion of land designated “Cherokee.”

The stories are told from the standpoint of the main character, Jebediah Collins (“Jeb” for short), who at age ninety remembers life as it was when he was young in Choestoe Valley. The author chooses to take the point of view of young Jeb. And from that standpoint, and with enthusiasm and a fluency of Appalachian speech, Jeb tells his stories. New author J. R. Collins acknowledges assistance from a fellow worker and journalism major, Shawn Jarrard, and from his agent Jeanie Loiacono of Loiacono Literary Agency, Irving, TX. The book was published by William Conner at W & B Publishers, Kernersville, NC. The book is available in print and kindle on Amazon. Joe Collins weaves the stories he himself told his children, Alex and Emma, into a novel.

Of course this review is prejudiced, because I like anything “Choestoe.” And if a writing comes from a kinsman, I am doubly proud that it could be about “our” place. In “about the author,” we are told that J. R. Collins is now working on a sequel to The Boy Who Danced with Rabbits, his second novel, with the title, Living in the Land Where Rabbits Dance.

Told from the standpoint of the young boy, Jeb, whose best friend is a Cherokee Indian boy his own age named Wolf, the story unfolds gently at first. But then the multiple hardships of life of the settlers to the Choestoe Valley unfold through the narrative, namely the “Thompie” Collins family (in real-life, actual settlers Thompson and Celia Self Collins, ancestors of both the author J. R. Collins and me). The settlers are friends to the Cherokee who still live in Choestoe Valley. They learn to communicate, to share knowledge of medicine and of how to “make-do” and live in the wilderness. Escapades of the two boys make life interesting. But responsibilities, which Jeb learns at an early age, are told with tenderness and insight throughout the novel. Hunting the forests for food, planting and harvesting crops from cleared patches, overcoming ravages of a tornado, and enjoying the festival of “Killing Time” (when the community came together to butcher hogs, calves, and goats and preserve them for food) are all a part of this story. When Jeb’s older brother is seriously injured in the storm, it takes a community to get him better. The Old Medicine Woman, a Cherokee neighbor, wields her wonder with herbal and other medicinal practices to help Cain through his long recovery.

I see a three-fold value in this novel by new author J. R. Collins. First, it gives from a young settler’s viewpoint information about how life was in the early 1830’s when self-preservation and living off the land was a way of life. It was “do or die,” and all worked hard to produce their part in the survival struggle. Second, the novel gives a look (though fictional, researched, and authentic) of friendly relationships between Cherokee and settlers, and how they helped each other before that dreadful edict, ‘The Trail of Tears’. And third, throughout the novel, Jeb’s strong faith in the Lord Jesus Christ is woven into his musings and his dialogue, revealing that both the settlers and the Indians (who already had influences from early missionaries to the Indians) trusted in the Great Spirit.

In his signed copy to me, author J. R. Collins wrote, “To Ethelene Dyer Jones, who has, all her life, danced with the rabbits in our beloved Choestoe!”

Congratulations, Joe Collins, on the advent of your notable book. I read it with joy, and with remembrance of similar stories that I heard as a child. Thank you for thus saving in printed form our noble heritage.