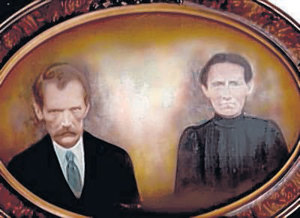 In a remote graveyard, half-mile back in the woods from the pavement, there is a new monument. It’s in Union County, the Georgia County which borders North Carolina on the south, and it marks the final resting place of Micajah Clark Dyer and wife Morena.

His name now also appears on the paved road, GA-180, which serves his native settlement of Choestoe, supposedly an Indian word for “place of the dancing rabbits” or something similar. 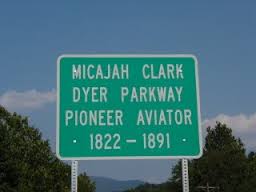 Dyer got an official U. S. Patent in 1874 for his design of a Rube Goldberg mechanical contraption slung beneath a balloon. Flapping paddles on either side of a streamlined hull would supposedly move the balloon forward.

“The paddles could be powered by steam,” he said in his patent description, “or some other suitable drive mechanism.”  They were meant to mimic a bird’s wings. 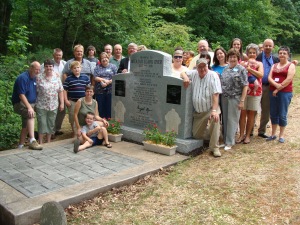 Dyer died in 1891 with only two small modest stones marking his and his wife’s graves. In the last few years, however, his descendants have sparked a large interest in the man and his works and provided a handsome memorial.

Done by WNC Marble near Murphy, North Carolina, it has the original small tombstones embedded in the big stone as well as text describing his work and the two drawings featured in his original patent application.

Family members also have a website now, which you can see — www.micajahclarkdyer.org and a descendant, Sylvia Turnage, has written a book about Dyer.  Both the title and the road sign describe him as “Georgia’s Pioneer Aviator.”

He obviously flew.  Observed by many word-of-mouth witnesses.  But what did he fly?

His new patent design — titled by the Patent Office as “Apparatus for Navigating the Air” — brought him both fame and ridicule.  Newspapers printed the story, other newspapers, then as now, saw it and reprinted in their newspapers. It was printed in the Gainesville and Atlanta papers and spread from there, reaching papers across the nation.

The Macon newspaper carried a straight story about the new airship patent, but in the final paragraphs of the story suggested that Mr. Dyer should have a room reserved for him at the state mental asylum in Milledgeville! 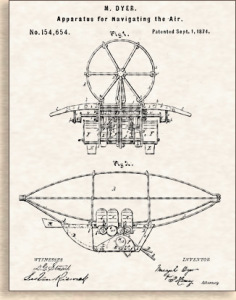 The design he had presented so well on paper was apparently never built or flown, proving too expensive even to construct. Detailed mechanical drawings accompanied patent application in 1874, for a wing-flapping apparatus beneath a balloon which probably never flew.

Along with the various news stories, there exists today a Letter to the Editor written by one of Dyer’s supporters, asking for money to pay for construction.  The writer said he felt Dyer’s design would prove itself if only it could be built.

During the seventeen years he lived and experimented after the patent, Dyer continued to work long and hard on the awesome idea of human flight.

Contemporaries said he was a tinkerer, a natural mechanic who built little toys and wind-powered whirligigs for children, and little airplanes that flew with spring motors salvaged from clocks, with bodies made from dried corn stalks.

That is amazing, and very revealing.  If you were an early thinker and you were focused on lightweight, super lightweight building materials and you had no balsa wood…just consider. In the mountains, far from any city, self-educated, you could not do better for a fuselage than a joint of dried cornstalk. Its strength-to-weight ratio is fantastic.

Dyer really raised eyebrows when he built his launching ramp on Rattlesnake Mountain overlooking his meadow.  One of his descendants told me the neighbors could hardly believe that a man “would put all that labor and logs and fence rails into a foolish thing like that.”

The greased wooden ramp, looking something like an Olympic ski-jump, would put his craft into the air numerous times.  Hunters who prowl the mountain in winter tell me traces of the ramp were still visible just a few years ago.

‘THOUGHT HE WAS CRAZY’

During the past week I sat down several times with Dyer descendants and Union County seniors and talked of Micajah Dyer and what they remembered old-timers telling them.

“Well, to tell the truth, lots of folks sorta thought he was crazy,” one said, “to build such a thing and then risk his life flying.”

“It was a novelty,” one ninety-three-year-old said.  “People were curious and would come to the Dyer home place to watch.”

They saw him fly, coming off the ramp and sailing over the meadow, but there were no cameras and no newspapers — no coverage of the flights; no details of what his “flyer” craft looked like.

“I think it was probably a glider,” one relative told me.  “I don’t think it had a motor at all.”

Tired of critics, or perhaps with his eye on another patent, Dyer kept his workshop locked tight except for one male assistant who was allowed access. Visitors, which were plentiful, peeped freely through the cracks.

One young girl’s comment on what she saw tells the tale.  “I looked though the slats into the workshop,” she told years later.  “And I saw something that looked like a dragonfly.”

After Dyer died his wife sold his drawings and models to a pair of wealthy brothers, the Redwines from Atlanta, and Dyer’s work was never seen again.

Some loving, loyal supporters say Dyer’s work helped the Wright brothers make the famous First Flight on the sands at Kitty Hawk. I doubt it.

The Wright brothers’ father was a bishop in a small obscure Protestant denomination.  They were educated, and they subscribed to a lot of newspapers, magazines and scientific journals. Skilled bicycle mechanics, they experimented with gliders and knew about propellers, but lacked a lightweight power plant.  When they got their hands on a small gasoline engine, they wisely built a little wind tunnel and learned which airfoil shape could produce lift…then made history.

Micajah Clark Dyer was not educated, lived in the isolation of these ancient mountains and found things out by himself, but he managed to build some sort of glider and flew it repeatedly off the ramp he devised.  He survived the flights and the landings and died of natural causes.

If he’d just had a gasoline engine…maybe an early air-cooled motorcycle motor…?