Chuck Walsh, author of A Month of Tomorrows, A Passage Back and A Splintered Dream is a graduate of the University of South Carolina, and discovered a passion for writing in 2004. Since then, he has written human-interest articles for a dozen publications. He also co-authored Faces of Freedom (featured on Sean Hannity’s book list), a book that recognizes the noble lives of U.S. soldiers who died while fighting in Iraq or Afghanistan.

“Chuck Walsh is a new kind of disciplined writer who—unlike many of his contemporaries in the e-media age where everyone sees themselves as a writer—serves as a model of the old school where mastery of the art is the only way to earn (and truly own) the title, “writer.” Walsh is indeed a writer in the purest sense, and a marvelous one at that; his mastery of the craft demonstrated by the ease, deftness, unpretentiousness and authority with which he tells a story.”

“Chuck Walsh is a master storyteller, a writer of extraordinary sensitivity and craftsmanship.  Walsh’s fiction shows an uncommon understanding of his characters and their relationships.  His writing is both dynamic and economical, with a special energy in dialogue that keeps the reader turning pages.”

A Month of Tomorrows 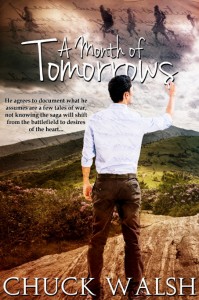 A Month of Tomorrows Reviews

“Poignant, dramatic and historically accurate, A Month of Tomorrows deftly weaves the lives of its characters past and present into a powerful and unique story.”

Based on a true story, it is a memoir dictated to a journalist who gains much more than a story, but also the rebirth of his family. Called to his bedside, Pete is introduced to a simple man whose life is woven between the jungles of the Philippines during WWII and the rolling hills of Tennessee; seen through the eyes of Samuel Gable, a war hero down to his final days on earth. Gable, who is in fact Walsh’s uncle, was accredited for restoring the Ville Verde Monument in 1987 in Luzon which was desecrated after its erection in 1945.

When Pete is asked to write the life and times of Samuel Gable, he has no idea the depth of the river he has been asked to swim, nor where the currents are about to take him. Without regard, he pushes all else aside, including his family, as he is overcome by the waters of the past; waters which he sees as an undertow but in reality is a whirlpool that ends up shooting him up and out to a new life and fresh start. One man’s recollections of war, loyal devotion to God, country and family and determination to put it all into words, will retch from you every raw emotion and make you wish there were more like him. 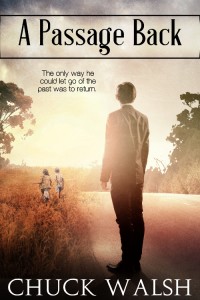 A Passage Back Reviews

Chase Watson has just attended his mother’s funeral. Forty-something, married, two grown children. He asks his son and daughter to hit a few balls on the ball field he played on as a kid, trying to to hang onto strands from his childhood, to make sense of the present. A rogue hit to third base careens off the corner of the plate striking Chase in the temple. He awakens in the lower bunk of the bed his shares with his younger brother Ricky…. thirty years ago.

Given a second chance to do what? Who could he tell that he was not twelve but forty-two? What would he change, if he could? Would any alteration change the whole future? Would his children be born? Would his mother have to die? Would he go back or have to relive his whole life over again 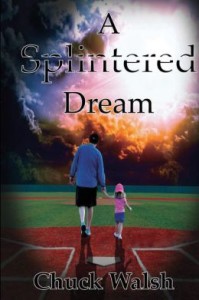 It is the story of Cape Jeffers, pegged as the next Mickey Mantle for the New York Yankees. The story starts out with Jeffers’ nanny attending what seems to be The Oprah Winfrey Show and ends with Jeffers’ being told he was going to be a Yankee on her show; going on to make the winning hit for the first game of the season.

Cape Jeffers has everything going for him: the top spot on each team as they move him up ladder to the Majors, the woman of his dreams, a $6 million contract, and a future so bright he needs sunglasses 24/7. Then, the rug flies out from underneath: his wife dies after pre-mature childbirth, the man he trusted with his fortune has been arrested for mismanagement of funds/theft by taking in the billions, and he has to choose between baseball and raising the only part left of his beloved wife, his daughter, Jules. This is the comeback-kid of all stories. You will cheer, laugh, cry, and stand in ovation. If you are a baseball fan or just need a hero, it is all right here.

Loiacono Literary Agency is not responsible for the scheduling of authors, negotiations, or fees associated with the speaking engagements. You may contact the author directly to check availability@ cwalsh0107@yahoo.com.