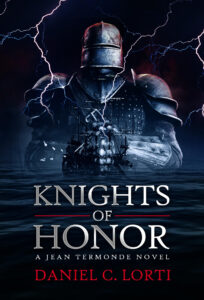 5.0 out of 5 stars Historical Fiction – Spellbinding Action with Historical Backgrounds

Knights of Honor was set during the Dark Ages and the story began as an attempt was made on the French ruler, King Charles V as he sat in the Royal Crown before a crowd of dignitaries. Fortunately for the King, the two assassins were both killed before they could achieve their aim, however, with the two assassins’ dead, figuring out who was after the king’s life became a matter of conjecture. A school of thought pointed accusing fingers at England because of their belligerent attitude towards France while others felt the mastermind would be a French citizen. The politics of the era especially as it surrounds the Papal states, Roman Catholics, England and France were well captured in Knights of Honor and one could easily feel the sights and sounds of that dangerous period of human history with each passage of the book.
The plot of Knights of Honor is rich and well supported with a full grasp of the geography, the economy and politics of that era. Large parts of Southern Europe, including countries such as France, Spain, Germany, Italy as well as the Mediterranean Sea and all the activities that transpired across the surrounding areas were well captured in the book and it was during a time that Byzantine Empire still holds sway in ancient Europe.
Reading through the book feels like a time travel backwards by several centuries and kudos to the author because writing about a medieval era with minute details of activities that transpired during the time and making it all to appear very believable and factual must have required lots of research and study of historical data.
Another good attribute of Knights of Honor is the chronological way the date and places were set at the beginning of each chapter which helps in reminding one of the actual backgrounds where each event is taking place.
An interesting book by all standards!
ILOVEUNIQUEBOOKS.COM