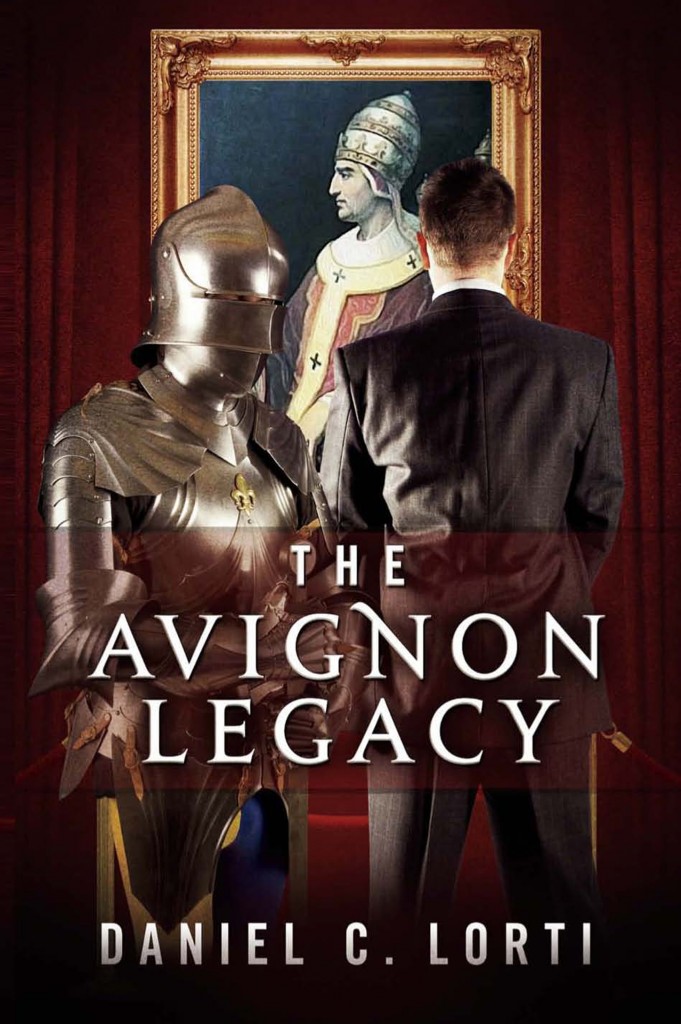 Synopsis: When Pope Gregory XI abruptly decides to move the Papacy back to Rome in 1377, chaos and rebellion descends upon both Avignon and the Papal States in Italy. The Rome-based Pope’s foes and critics are everywhere and any shipment of the papal treasury from Avignon to the Vatican is at risk. An ingenious location is devised by Sir Jean Termonde, a heroic knight, to secure the treasure from discovery until it can be transferred to Rome. The papal treasure never arrived at the Vatican, and the legend of the lost gold and jewels has grown over the centuries.

Rare book dealer Jim Pierce’s expertise is in tracking down and retrieving old volumes coveted by well-heeled clients. He has little interest in the French Middle Ages until two armed thugs enter his bookstore demanding an ancient 14th century volume on the Avignon Papacy that mentions the Church’s treasury. They are killed thanks to Pierce’s precautionary measures. When he receives an offer of $5 million from the legendary billionaire recluse John W. Baxter, to steal a 14thcentury volume from the Vatican Secret Archives, his interest is piqued leading him to wonder if Baxter wants the volume or if the contents are related to the treasure. So Pierce sets out to attempt two thefts: the volume from the Vatican, and the treasure from Avignon. That’s when he discovers the French and the British police are on Baxter’s heels who is, in turn, after him.

Critique: An extraordinary and original novel, The Avignon Legacy documents author Daniel C. Lorti as an exceptionally gifted author with an impressive set of storytelling skills. A compelling and consistently entertaining read from beginning to end, The Avignon Legacy is the stuff from which block-buster Hollywood movies are made. While very highly recommended for community library General Fiction collections, it should be noted for personal reading lists that it is also available in a Kindle edition ($3.99).

The Avignon Legacy is an excellent story which builds a mystery and Ocean’s Eleven type cat and mouse with the controversial history of Avignon. I enjoyed seeing the parallels between the events of Part 1 and 2. I loved the suspense as Pierce carries out his plan to retrieve a book for his clients. I highly recommend the Avignon Legacy.

I want to share my thoughts on a book I just read by a Facebook friend/author, Daniel C. Lorti. It is called The Avignon Legacy. Great cover by the way. Anyhow half of the book takes place in the 14th century Europe during the Middle Ages and it weaves in a lot of historical events while presenting a story about two knights who were best friends and their exploits. This part alone would make “Game of Thrones” relegated to just a King Author tale. It centers about a lost treasure which was the property of the French Vatican at Avignon. The second part is the present day and involves two friendly scoundrels and ancient book thieves who are lured into a quest for the hinted treasure. This makes a terrific follow-on to the first part. There’s romantic interests and banter throughout. Loved it!

I took a Facebook friend’s interesting critique of The Avignon Legacy, a book by Daniel C. Lorti to heart and got a copy. No regrets. What a wonderful story, I found myself taking it with me where ever I went just to keep reading it. Its historical basis in the 14th century was entertaining and interesting. I loved the way two knights met in the first part and how two men with a touch of larceny met in the second part which takes place in the present day. Brava!

I got curious about the touted novel, The Avignon Legacy by Daniel C. Lorti who is a Southern California author and gave it a try. If a history class was like this in college, I would have earned an A. A terrific read and I give it two thumbs up. I have to agree, it would make a great TV series or movie. The intrigue, romance and wisecracking while the story progressed kept me grinning. I’ve been to Provence, France and Avignon and I can picture the events happening just as described. A recommended read. I’m making it a housewarming present for my BFF.

This book is a great read! Daniel Lorti is a wonderfully inventive and smart writer. He has created a world and characters that you will be happy to follow on their adventures. Read this book and you’ll have a terrific time.

“…a fascinating tale of a treasure hunt well told.”

The Avignon Legacy takes us from the 14th Century and the life of Jean Termonde, a knight and papal guard, to present day and a rare book dealer, Jim Pierce, who has been “commissioned” to acquire the tome Termonde last penned for Pope Gregory XI. It is not the words or the ancient parchment it is written on, the document contains a message to the pope cryptically revealing the location of the lost papal treasure, with Pierce being chased by an unscrupulous collector, who -in turn- has attracted the FBI, New Scotland Yard and the French authorities to the unknown quest. (Taken from the back of the book)

The first part is an incredible adventure chronicling the lives of the Termonde family. We start at the beginning of an event that has a ripple effect on the family. We’re there through the first half (or possibly more) of Jean Termonde’s life. This part of the story is actually pretty entertaining. It is fictional history showing us what life was like at the time for a few extraordinary people. Most of it is believable and interesting.

When it comes to the Catholic Church history, there are times when it becomes a bit ‘history book’ but it’s not too overwhelming. Lorti makes sure that we have a good grasp of what’s going on and the historical significance of it. For me, I honestly skimmed over it. It’s not my thing. Over all, though, it’s not a lot of history. It’s enough to explain everything, but it doesn’t really bog you down. For those that ARE interested in history, you’ll find a lot here to fascinate you. I must admit, even in my skimming, I learned.

I was intrigued with the heist portion of the story. How do you steal something from the Vatican? Even when you’re a professional thief and have others at your disposal, that’s a pretty serious theft! Then to add in that you have thugs and all sorts of police after you, it’s nearly impossible! The sheer genius behind the planning of this heist and the attempt at pulling it off is what made the second part of the book good for me.

Lorti does a fine job of bringing great history to life. Little known facts of Papal wealth and those assigned to guard it, as well as the Pope himself, are somewhat taboo. The facts and characters are well-researched; the descriptions and details make you feel right there. Going from past to present day, he continues the adventure and then some. I highly recommend this and would like to read more of his works.