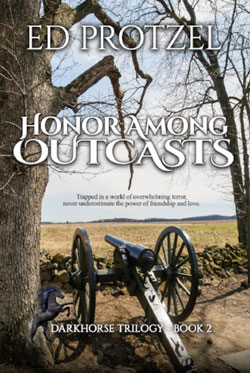 In Honor Among Outcasts by Ed Protzel, abolitionist Durksen Hurst, his fiancée Antoinette DuVallier and a group of former slaves left Mississippi and made their way to Missouri, a state plagued with terrible guerrilla fighting. The little band has one goal; join the Union Army and fight. Barred from enlisting in the regular army, they join the Missouri State Militia and are given the designation as the 9th MSM Colored Calvary. Ill equipped and unarmed, they are sent to Lawrence Kansas just in time for Quantrill’s Raiders’ cold-blooded Lawrence massacre. But Durk and Antoinette’s problems are just starting when they are accused of brutal crimes. They are also marked for revenge by enemies from their past and death from a vengeful Union Army. Somehow, they must do whatever it takes to survive, if they can.

For period fiction, Honor Among Outcasts is a good story and I enjoyed reading it. The characters the author has created, showing their strengths and flaws, are strong and identifiable. The story is well developed and the plot has enough twists and turns to keep the reader’s interest. I did find one small matter. A sequel must stand alone, but must also provide enough back story so the reader can understand the plot. This book did that for the most part, but the reader is only given little pieces of back story at different times as to who are the good guys and who are the bad guys. This makes it a little confusing. However, this is a very good read for those, like me, who are fans of period fiction. The end also leaves the reader wanting to find out what happens next.

I learned so much about what happened in Missouri during the Civil War reading Honor Among Outcasts. We are not told nor taught much of anything about blacks’ roles in fighting for either side nor bushwhackers. My gosh, those who were just trying to survive were being hit three-fold by the North, South, and raiders who did not care what side you were on. I think Protzel did a remarkable job in fleshing out not only all those aspects but also those of the families that followed the soldiers and provided for them. Excellent writing! I will read anything he has or will write.