Something in Madness Reviews 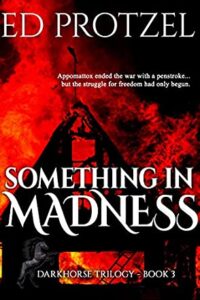 Something in Madness Amazon Reviews

Ed Protzel is a pro! Anything he pens is fantastic! Read the first two as well: The Lies That Bind and Honor Among Outcasts. Bravo!

This author participates in our Review Exchange and Book Donation Program. Click here to learn more.

Ed Protzel’s Something in Madness is set in post-Civil War Turkle, Mississippi. Durksen Hurst, a white former Union Army captain of a black unit, returns home to Mississippi with Antoinette, Big Josh, Long Lou, and a boy named Caleb, only to find that blacks are still treated–and sometimes even worse–as if they are slaves. After the war, slaves were legally freed, but many southern states did not want to release their slaves. The state calls them freedmen in name only. The town is led by Colonel Rutherford, a former Confederate soldier, and he has no plans of giving freedom to the slaves. Rutherford has enforced Black Codes, allowing them to legally accost any black man in the streets and sell them at auction. He pushes for all southern states to do the same. He also has many of the townsfolk in his service doing his evil bidding. Durk opens a law practice while attempting to recover the rights to his lost land, DarkHorse, and Mrs. Antoinette DuVallier-French’s land, FrenchAcres, but is met with many obstacles along the way from others who would rather have him and his friends dead.

Something in Madness is a gripping work of historical fiction! Ed Protzel created an action-packed depiction of American life in that era. Protzel does a remarkable job of highlighting the prejudice and violence faced by newly freed slaves. Something in Madness is immaculately well written and you can tell that the author took the time to thoroughly research details of the time to adequately reflect realistic circumstances. The dialogue is well-crafted to portray the speech patterns and mannerisms of the period. The story is well-paced and brilliantly written to hold your attention. There are many moments of intense suspense that cause you to hold your breath in anticipation of what will happen next. Protzel’s depiction of Durk’s character evolving from a cowardly schemer to a man with a conscience who bravely stood up for his beliefs was extraordinary. All of the characters and the storyline were brilliantly written and expertly executed. I was captivated from beginning to end.