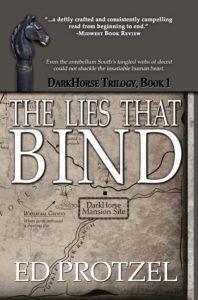 Amazon The Lies That Bind Reviews

The Lies That Bind is aReaders’ Favorite stunning opening in the DarkHorse Trilogy by Ed Protzel, a gripping tale for fans of Southern fiction, and a story of deceit, slavery, and dangerous complicities. The trickster Durksen Hurst returns to Mississippi after being away for a long time and after leaving a very disgraceful legacy. He is broke and he wants to make things better this time around. He finds the opportunity when he discovers a group of slaves hiding in the wilds, hungry and desperately seeking a livelihood. He convinces them to start a plantation with him. But this venture doesn’t come as good news to many people, especially the widow, Mrs. French, and her son, Devereau. Conflict becomes inevitable and it builds up pretty fast with the arrival of the enigmatic Antoinette DuVallier, seeking her missing son. The reader is pulled into a world of deceit, greed, and lies.

Ed Protzel is a gifted storyteller and readers will enjoy the setting he has created for this impassioned story, a world where slavery is a gruesome reality and where the value of human life could be traded for a morsel of bread. The story is conflict-driven and readers will love the protagonist, a man who is motivated and determined to right his wrongs. The pacing is great and the narrative voice is light and friendly, coming across compellingly through the tight and well-crafted prose. The Lies That Bind features very powerful themes masterfully written into the story, like slavery, family, and what it took to survive in the harsh world of the racial South in the 1850s. The historical elements of the story are strong and the reader’s imagination is filled with vivid images from the lyrical writing.

Book Review: The Lies That Bind

“Empty pistol has sealed more deals than all the numbers in my head, Hurst thought. We’re going to need every trick in my bag, and some I haven’t thought of yet.” (Quote from The Lies That Bind, by Ed Protzel.)

The Lies That Bind by Ed Protzel depicts the dichotomy of the Deep South. It is a story that shows a period long forgotten but the book also shows the character of his protagonist, Hurst, trying make some sense of his existence.

Well-written, Protzel draws his readers into the Deep South, into Mississippi, the swamps, and the picturesque scenery of a southern state. It is an intense book. There are a lot of things happening, and you cannot hurry through it, because Protzel pulls you into his world. You want to read what comes next.

The Lies That Bind is the first book I have read by Ed Protzel. To say that it was an interesting read is an understatement because it is more than interesting. The book engages your mind.

Historical Novel Society magazine – Issue 77 (August 2016)
‘The action and drama are compelling from the first page to the exciting conclusion. The animosity between the French plantation and Hurst builds to an exciting and surprising climax. Antoinette is so mysterious, one doesn’t know of her mission until the end. Highly recommended, and I am anxious to read the next installment.”

Midwest Book Review – Small Press Bookwatch, Vol 15, July 2016
“The debut novel of author Ed Protzel’s ‘Dark Horse Trilogy’ series, “The Lies That Bind” is a deftly crafted and consistently compelling read from beginning to end. While strongly recommended for community library Historical Fiction collections, it should be noted for personal reading lists that “The Lies That Bind” is also available in a Kindle edition.”

A Tale of Lies and Deception

“…an entertaining and complexly plotted pre-Civil War novel about fairness and decency versus slavery and greed.”

“One of the strengths of the book is in its vivid characterizations and the author’s depictions of the natural world.”

The Lies that Bind by Ed Protzel is set in a small back-country town called Turkel, Mississippi. It’s an entertaining and complexly plotted pre-Civil War novel about fairness and decency versus slavery and greed. Cotton, the South’s money crop, also plays a large role in the story. There is an illuminating scene in a cotton broker’s office that’s reminiscent of how big business, especially hedge fund bankers, work today.

Protagonist, Dursken Hurst, a drifter and idealist who wants to end slavery, is pitted against Marie Brussard French, Turkel’s aging and reclusive doyenne, who lives on her large plantation. Like the chess pieces Mrs. French manipulates in the her sitting room, she also controls all aspects of life in Turkel, including those of her son, Devereau. These main characters are supported by a cross-section of humanity, from local Indians; slaves; assorted riffraff; and a beautiful woman on the run. The book is aptly named, because much in this novel is not what it appears to be.

One of the strengths of the book is in its vivid characterizations and the author’s depictions of the natural world, such as these descriptions of Devereau and of the setting sun:

“Devereau was thirty-one, the rosy softness of his naked cheeks and his slight stature gave one the sense of an adolescent boy.… Lightly freckled and frail, with cropped auburn hair, this morning he appeared a trembling, emaciated stick figure, with eyes bloodshot and swollen.”

“Dark rapidly closed in, the sun’s retracting tendrils leaving bloody claw marks upon the clouded sky. The final residue of daylight trained quickly behind the western hills, drawing with it what little warmth remained of the day.”

Perhaps because this is the first of a trilogy, The Lies that Bind is very ambitiously plotted. Through most of the novel, delicious details are released at a slow, easy pace. Towards the end, the action speeds up, sometimes leaving loose ends. One might wonder if a few revelations could have waited until book two.

A twisted tale of wanting things you cannot have. A charlatan who wants peace, no more running; slaves who want freedom, an old woman who wants to be in control of everyone and everything; a son who wants to be rid of her forever, yet wants a child to carry on the family name; the child’s mother, who had him torn from her grasp and is desperate to get him back; a young woman who is compelled by God to free the slaves, and…the Civil War is at their door. From the first sentence to the last, I was pressed to find out the truth. Can’t wait for the sequel.

I found the book highly entertaining and an enjoyable read. The book kept me guessing all the way through of who these people really were and the true relationships between them. The author’s writing is well paced and his style makes the characters come alive. I liked the twists in the book and the ending really threw me for a loop. I recommend this book if you want a fun and good read.

A riveting story–this dramatic and thought-provoking first book in The Dark Horse Trilogy is more than worth your time. The writing drives you forward with interesting characters and incredible scenes. I highly recommend this book! The Lies That Bind (DarkHorse Trilogy) (Volume 1)

5.0 out of 5 starsThe former leads the reader along an easy route, only to discover that it has suddenly …

What a first novel! It seems that for the past few years, well-written novels fall into one of two categories: Either they provide a stroll through a pleasant path, a comforting respite from the madness of the human situation, or they leave me brow furrowed, exhausted from the effort of concentrating on those same problems.

Here’s a novel that entertains with its gamesmanship: The central conceit of playing chess requires careful attention, but attention that doesn’t require the reader to burn brain cells.

Main characters play consequential games of chess, but more exhilarating is the game between the story (the author) and the reader. The former leads the reader along an easy route, only to discover that it has suddenly turned a right angle. While the reader believes only a pawn appears vulnerable, suddenly the board spins and the reader has at least to chuckle. (This reader broke into a giggle when he saw the sudden new direction.)
The book takes the conventions of black and white in chess and turns them on their heads. A bishop flips to become a queen; pawns become knights.

And once the game ends (sort of: This novel marks the start with two more promised to fill out a trilogy), the reader realizes there’s a deeper, more significant set of themes to consider. Having slid easily along, enjoyed some hilarious twists, delightful direction changes, startling shifts, the reader realizes there is more here than a game. The story has dipped deeply into the inherent conflicts of the living out of The American Dream.

5.0 out of 5 starsI read this thrilling novel in one sitting.

I read this thrilling novel in one sitting! It makes a terrific book club selection. Our book club loved it and had a very lively discussion about it.