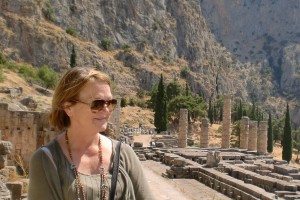 The Devil Takes Half 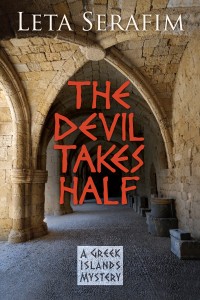 The Devil Takes Half Reviews

An archaeological dig near a desolate monastery in Greece is no longer the innocent search for Minoans, the mysterious precursors to the Greek who disappeared without a trace more than 3500 years before; giving rise to the legend of Atlantis. A severed hand and what seems to be all the blood from the missing archaeologist, Eleni Argentis, is found in a trench, and her teenage assistant, Petros, is found nearby with his throat slit.

On such a remote island, there are only so many suspects. Then again, Yiannis Patronas, the policeman in charge of the investigation, finds all is not as it appears, and some secrets are as ancient as the site itself.

When the Devil’s Idle 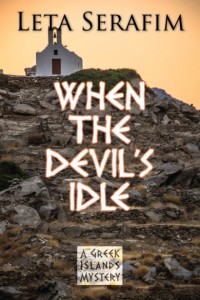 When the Devil’s Idle reviews

When an elderly German is found with his skull bashed in on Patmos, the same isle St. John wrote the Apocalypse, Yiannis Patronas, Chief Officer of the Chios police, is called in to investigate. He asks his top detective, Giorgos Tembelos, and his friend and amateur sleuth, Papa Michalis to join him.

With only a handful of suspects on such an isolated island— the gardener, the housekeeper, the deceased’s son, daughter-in-law and two grandchildren— Patronas is limited, and yet even more challenged. Who is capable? Who has motive? Who wanted the old German dead? Why? Could the answers be immediate or far reaching?

“This classic fair-play whodunit, the excellent sequel to 2014’s The Devil Takes Half (Serafim’s first Greek Island mystery), takes Yiannis Patronas, the endearing chief police officer on the island of Chios, to Patmos, where someone has bashed in the skull of Walter Bechtel, a 90-year-old German, in the garden of his foster son Gunther’s holiday residence–and carved a swastika on the victim’s forehead. When Patronas asks Gunther about his foster father’s past, Gunther becomes defensive and claims that his papa was ‘just an ordinary man’ and did not commit any atrocities during WWII. Serafim does an especially good job of integrating Greece’s current financial struggles into the story line, and Patronas’s colleagues, especially an eccentric priest with a taste for seafood, lighten what otherwise could have been a very grim tale without minimizing the underlying horror of the background to the crime.”

“The pairing of cynical Patronas and optimistic Michalis injects some humor in an otherwise moderately paced procedural. Serafim expertly creates the beauty of Greece. However, the real draws of this book are the fully developed, complex characters, and the facts on Greek culture and history. Book two in the Greek Islands Mystery series is sure to satisfy.”

From the Devil’s Farm: A Ritual Sacrifice on the Isle of Sifnos 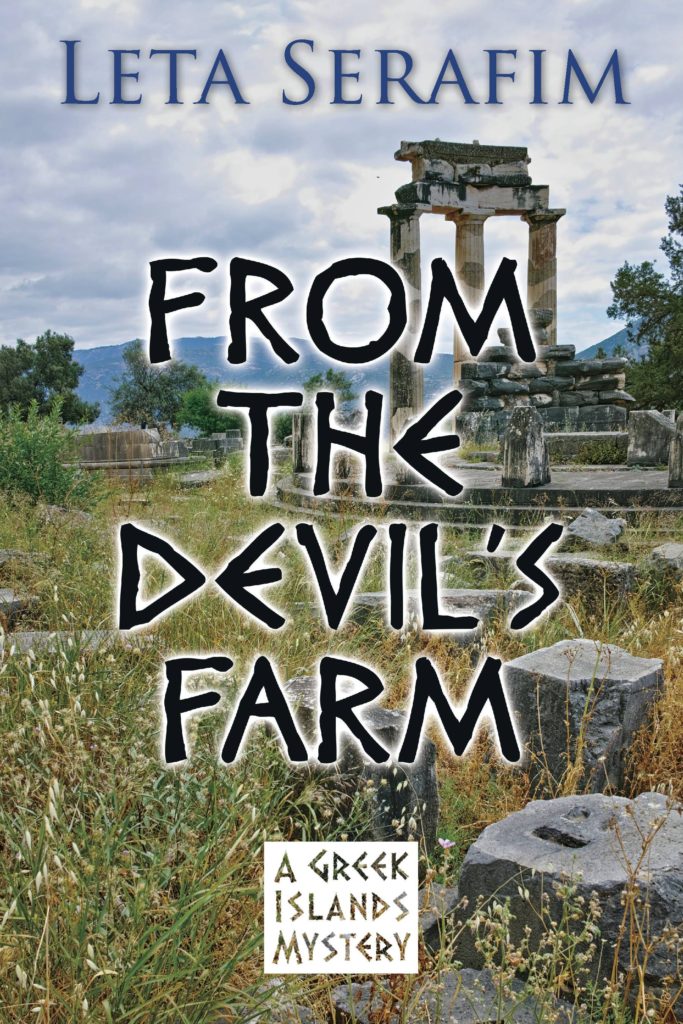 From the Devil’s Farm Reviews

A child’s body is found in the ruins of an ancient temple, a famed landmark marking the entrance to the harbor of Naxos, one of the largest Cycladic Islands in Greece. The boy has been bled dry, his carotid artery nicked and the blood apparently collected as there is little in evidence. “The work of two people,” Yiannis Patronas, Chief Officer of the Chios police who is called in to investigate, decides when he arrives at the scene, “one to hold the boy down, the other to do the cutting.”

Was it cult related? Is it a sadistic murderer? Did the boy perhaps know his deliverer from this world?

To Look On Death No More 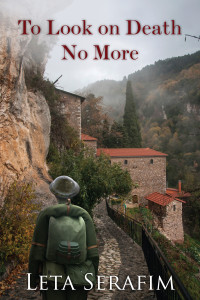 To Look on Death No More Reviews

In autumn of 1943, a lone allied soldier parachutes into Greece. His stated goal: to build an airstrip for the British. Brendon O’Malley is an Irishman, and he soon discovers that fighting the Nazis is not the same as embracing the British, who have seriously misled him about his mission. Wounded during the drop, he’s set upon and robbed by a seventeen-year-old girl, Danae, and her little brother, Stefanos, who hold him captive for over six weeks, first in a cave and later in the cellar of their home. A wary friendship develops between the three. Over time O’Malley’s relationship with the girl gradually deepens into love.

Slowly O’Malley earns Danae’s trust, and he stays on with her family in their house in the village. After his wounds heal, he heads up into the mountains to join the Greek soldiers, the antartes, who are suspicious of the British and slow to accept him into their ranks. O’Malley is no ordinary man, and his honesty, strength, and courage impress them, finally winning the day. But disaster lies just ahead… The Nazis, already a palpable presence in their lives, stage a savage attack on Kalavryta. Through it all, the love of this Irishman for his indomitable Greek muse cannot be extinguished. 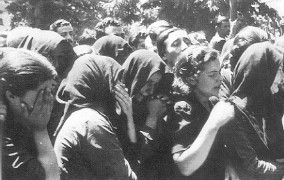 The women of Kalavyrta morn for their men.

A strong, Greek woman stares down a Nazi soldier; one who will slaughter the men behind her. 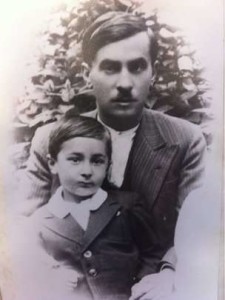 Giorgos Dimopoulos as a child with his father Dimitrios who was a victim of the Kalavryta. 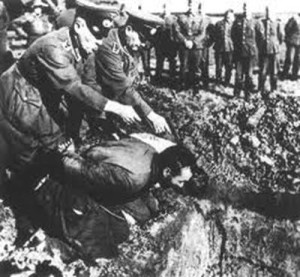 The Massacre is the term used to refer to the extermination of the entire male population and the razing and total destruction of the Greek town, Kalavryta, 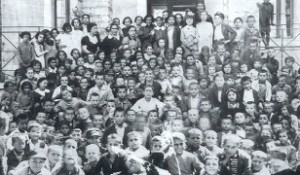 Women and children were herded into the church and then the Nazis burned it. 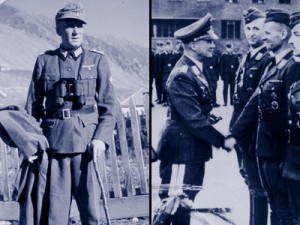 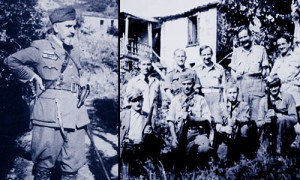 Names of the dead. 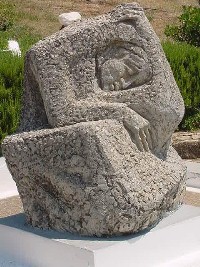 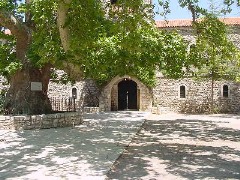 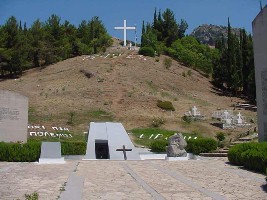 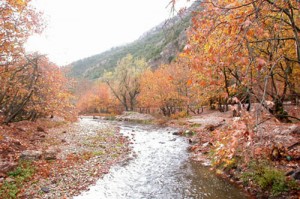 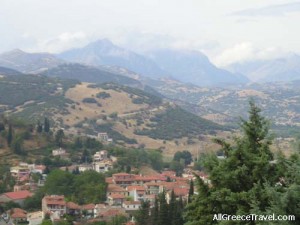 Brendan O’Malley was an Irishman with heroic ideals who joined His Majesty’s army to rid the world of tyrannous rulers – specifically Hitler. His former dispatches were in Cairo, challenging Rommel in the desert; his last in Greece the autumn of 1943 with the stated objective ‘to make contact with partisan forces and build airstrips.’ Parachuting in, he is wounded and is found by Danae, a seventeen year old Greek girl, and her brother, Stefanos. Although they take his guns and food, they hide him from the enemy in a cave for weeks, saving his life. He, in turn, helps Danae’s family and joins the rebel forces to fight the Germans.

A true love story, as well as an expose’ of what occurred in a remote part of Greece close to the end of the war, you feel as if you are there, so hungry your insides ache; so cold you shiver – bracing against the slicing winds of the mountains, yet so in love you are afraid to acknowledge your heart; knowing either of you may not exist tomorrow.

Thoroughly researched, Serafim’s documentation and pictures give breath to those who lived and those who were lost. Most WWII stories are written with Italy, Germany, Great Britain and the United States as the focal points, but who has read of the atrocities committed against the Greeks? Who has been satisfied with their meager atonements?

Loiacono Literary Agency is not responsible for the scheduling of authors, negotiations, or fees associated with the speaking engagements. You may contact the author directly to check availability@lserafim@verizon.net .