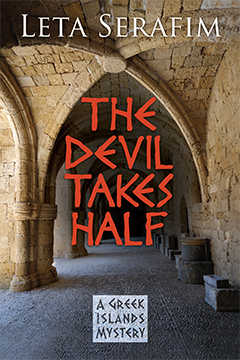 Fantastic review for The Devil Takes Half by Leta Serafim

Link to this review by davidtomashek tagged mystery

On the small Greek island of Chios there has not been a murder since World War II. But now, at the site of an amateur archeological dig, heiress Eleni Argentis and her young assistant have been found brutally murdered. Chief Police Officer Yiannis Patronas must find the culprits. Could Eleni have actually found a valuable Minoan artifact worth killing for? The inspector searches for clues in an ancient monastery where history and the modern world sit side-by-side.

Why I picked it up: Detective Patronas was described as a Greek Columbo, and I have always loved the clever way he could trap a murderer.

Why I finished it: Like Columbo, Detective Patronas is short and rumpled, but there the similarity ends. Patronas is a career investigator who has never conducted a murder investigation before, and throughout the novel he is out of his depth. The police are understaffed, under-equipped, and underpaid, victims of the brutal austerity imposed on Greece by the European Union. Patronas slogs through as best he can, and even gets lectured on police procedure by the elderly priest who knows all about it from watching American TV shows.

Readalikes: Patronas shares a certain resigned cynicism with Salvo Montalbano, the Sicilian inspector in Andrea Camilleri’s novels. The first three of those novels are now collected in Death in Sicily.

The Devil Takes Half by Leta Serafim

Patronas, our loveable detective is the Greek version of Columbo.  Stumbling over clues to catch a killer on the exotic island of Greece. Don’t mistake him for a fool.  A wonderfully different “who done it”.

“[An] impressive debut …. The discovery of a severed hand lying in a pool of blood brings Yiannis Patronas, the chief police officer on the island of Chios, to an archeological dig near a remote and almost deserted monastery. After a young worker at the site gets his throat cut, more violent assaults follow. The ensuing police procedural is improvised and uncertain because Yiannis is a troubled, bumbling hero who has had no experience with murder cases or sadistic criminals. He’s also burdened with incompetent subordinates, and his only real assistant is an elderly priest who’s watched too many American detective TV shows. Serafim has a good eye for people and places, and sheds light on the centuries of violent passion that have created an oppressive atmosphere hanging over the sunny Greek landscape.”

“The Greeks have a word for it, and in this fast-paced, delightful mystery, that word is murder. A cop with a nagging wife and an old priest with an addiction to American TV are spurred to investigate the homicide of a beautiful anthropologist who may have dug up more than shards of an ancient urn. The real buried treasure is pure pleasure in Serafim’s debut novel.”

“Leta Seraphim’s deftly crafted descriptions of people, places and action quickly transports the reader into the midst of the seemingly tranquil and spiritual setting of a remote ancient monastery on the island of Chios where, alas (!) sinister and gruesome events are taking place. The mystical element of the monastic setting quickly turns to an unholy mystery as this suspenseful and fast paced tale of unspeakable murders draws you into its setting: an archeological site, the quest to discover a Minoan settlement and an unlikely assemblage of intriguing characters who become tangled together as the story unfolds. A determined Chief Police Officer, several Archeologists, a young and impoverished assistant and a priest all come to life in this beautifully rendered mystery. Intelligently written, with keenly observed characters and places and ever mindful of the rich history of this Greek island, Leta Serafim’s narrative delivers an enjoyable and skillfully developed story that holds your interest from start to finish.”

“In The Devil Takes Half, Leta Serafim has done an excellent job capturing the nuances and mentality of the Greek people: young, middle age and old. As the child of Greek immigrants who were careful to pass on a thorough knowledge of their language, culture, and tradition, I am delighted to find an American who has not only taken the time to do her research but also understands the sacrifice and beauty of a proud people and country. Her humor and use of the Greek language help to paint a vivid literary portrait of a group of characters who are only too real. I can actually see this riveting mystery novel being made into a wonderful motion picture. What fun!”

What a gem! I am looking forward to the next one in the series.

I’m not usually a reader of mysteries, but this series will be changing my mind. Rich prose, a gorgeous and terrible (in other words complex) setting, and fully realized characters make this a riveting piece of work. I am officially a fan of this author, and will wait impatiently for the next in the series,

This was a really good read. The characters were very well developed

This was a really good read. The characters were very well developed, the local flavor and atmosphere finely drawn. The historical research was very well done and included in a way that was extremely interesting and informative. All this while giving you a first rate mystery that was very tough to solve ahead of time. I recommend it to anyone especially if you like history, archeology or learning about another culture. I feel like I took a trip to Greece.

I enjoyed this book very much

I enjoyed this book very much. The author portrays the Greek culture with accuracy and humor. The characters come to life and the story holds your attention and interest. The book is very well written and describes the Greek character and draws from history with accuracy. I am looking forward to this author’s next book!

Insightful view of Chios and its people with language that is charming and picturesque.

Great read. Looking forward to the next in the…

Great read. Looking forward to the next in the series.