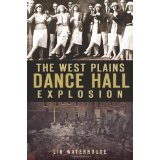 This is a thriller for sure. Don’t miss out on this one as it’s not just for the folks in and around West Plains, MO.
This topic has been talked about for years but now this talented author has done more than talk, her in-depth research as put all of the facts together, laid to rest many of the unfounded tales and comes up with a book you just can’t put down. The West Plains Dance Hall Explosion would make a wonderful movie. I don’t want to say any more about it and ruin it for you.

I reviewed this book for the Ozarks Mountaineer magazine, and the following review is lifted from that review. Author Lin Waterhouse says that many people who survived or lost loved ones in The West Plains Dance Hall Explosion that killed 39 people in 1928 were disinclined to talk about the event in the years that followed. Maybe that’s why, even though I’ve lived my whole life in the Ozarks and consider myself a student of the region’s history, until I learned of her book, I had never heard about what is arguably the greatest single tragedy ever to occur here.
On the night of April 13, 1928, a large group of mostly young people from prominent West Plains-area families gathered for an evening of dancing at Bond Hall on the second floor of the Ward Building on East Main Street just off the West Plains square. At 11:05 p.m., just as the dance was winding down, a huge explosion from the first-floor Wiser Motor Company below Bond Hall ripped through walls and ceilings, destroying not only the Ward Building but the next building on either side and damaging other structures throughout the entire downtown area. The blast sent dancers hurtling upward and then tumbling down into a large pile of burning debris. Many of those not killed by the initial explosion were trapped and burned to death in the fiery rubble, while a few managed to escape or were rescued.
In this book, Ms. Waterhouse not only gives a detailed account of the events surrounding the explosion but also adds interesting background about the lives of many of the victims and survivors, letting the reader get to know the players in this tragic drama and thus making the story of The West Plains dance hall explosion even more poignant. If you have a connection to the West Plains area, this book is a must-have, but I recommend it to other people from the Ozarks as well or even to readers from other regions who enjoy a good human-interest story.

I purchased this book because I lived in West Plains as a child and remember hearing the stories and seeing the monument for the unidentified people who were killed in the explosion. This superbly written book gave me many facts, stories and theories that I never knew about this tragedy. I also discovered that two of my own ancestors were a part of this event and that one of them Ralph “Bus” Langston, was present during the explosion and ended up being the one person with the least injuries (all because he took a short break from manning the coat room). I think this book would make an excellent movie! Whether or not you have roots in West Plains I think anyone would enjoy reading this book.

A true story of a mysterious tragedy.

Since this took place near an area I grew up in, it may have held more interest for me than it would for someone without such close connection. Walking the same streets, driving the same roads, and recognizing family names made the sad story personal. However, for anyone with an interest in historical documentaries it would be a great read. Very well-written, the author captured the personalities of victims and survivors alike while exploring the as-yet-to-this-day unexplained tragedy.

Takes You Along the Path Directly Into the Flames

I’m at a loss for decent adjectives for describing how well Lin Waterhouse has written this moving, dramatic tragedy in a Midwestern community — West Plains, Missouri.

Using family memories, notes, testimony and photos from the community, Lin Waterhouse puts seriously realistic faces on the people (not characters, but real life people) who were living in West Plains, Missouri that night.

A true cold case, there has been no determination of cause or identification of perpetrators for the Dance Hall Explosion. But, it wasn’t a bad dream — it really happened and 39 people died. Some never knew what hit them; many knew it more than any soul can endure.

The author includes some basic foundational history of West Plains, including Civil War troubles for many residents. Today, we think of West Plains and think of the fine Missouri State University there, the thriving business community and happier history as a center for Country Music with native resident, Porter Wagoner who was a babe in arms (8/1927 — 10/2007) on that terrible spring evening. Some people still stop for a quiet moment at the memorial headstone marking the grave field sheltering the victims that could not be identified. I admire the spiritual bravery of their survivors who simply committed them to hometown soil together from the tunes of this plain until the music of eternity.

I highly recommend this book and this author. I’m proud to be personally and professionally acquainted with her and look forward to reading everything she writes. I bought this book on my Kindle and it is going to be a favorite that I will let my friends and family hold the precious Kindle for a chance to read.

This non-fiction book brought tears to my eyes. Lin Waterhouse has reached back through time to enter the minds and hearts of people who were simply going out for an evening of fun, but instead entered a night of horror. Readers can see, hear, taste, smell, and touch the burning world of that night. From actual facts to unfounded rumors, the author explores the possible clues and solutions to this almost century-old cold case. By the end of the book, readers can’t help but to hope that someday the world will finally know what happened that long-ago April night.

Reading this story, I felt the presence of those killed in the explosion. I heard their voices crying for answers, closure. Lin Waterhouse has given them the chance to move on in this nonfiction cold-case. If they had the technology we have now back then, it would have been a no-brainer. Lin’s thorough research and diligence has paid off in aces. So many questions and accusations have been put to rest. Well written and executed. My hat is off for her professionalism. I have also read Bred to the Bone: Eternal Secrets at Hunter’s Water Mill and am looking forward to The Ghost of Timmy Wahl: Eternal Secrets at Hunter’s Water Mill. Love that area of the country.

This is a very interesting book for people who know about the West Plains Explosion (mostly local folks I would think.) Growing up in this area I have always heard bits and pieces of the story, and this book ties the details together. I was surprised to read just “who” the victims were and how many people I now know who are relatives of those unfortunate folks. It takes some piecing the story together and going back to reread sections to really understand and follow the story. I’m not sure if the book would be as interesting to people who don’t know West Plains as it was to me. I found out that I actually have several connections with the people involved.
I also read (twice) The Maid’s Version by Daniel Woodrell- a new “fictionalized” account of the explosion. It was fascinating to try to figure out which “fictional” character might
have been modeled after which real person.
Between the two books and what I knew and could find out from others, I feel like I actually know “who-dun-it” in the eyes of Waterhouse and Woodrell. It was a fascinating look at local history.

Great book, not only for Missourians but for everyone

Great book highlighting a little-known tragedy in this small Missouri town. I recommend this book for everyone. Don’t think that because you’re not from Missouri that you won’t like it

I’d never before read anything about the tragedy. The author did a workmanlike job with the information she researched. Her writing just wasn’t that riveting.