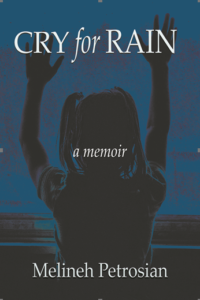 [Following is an official www.OnlineBookClub.org review of Cry For Rain by Melineh Petrosian.]

Cry for Rain by Melineh Petrosian is a deeply moving memoir, the true story of the author’s life as she grew up as a minority in an Armenian Christian family in the tumultuous environment of Iran from the late 60’s through early 80’s. The political and religious upheaval of the country mirrored the state of protagonist Ariana’s home where she and her siblings suffered abuse at the hands of their mentally unstable mother. They lived in a perpetual state of fear of Mom’s next rampage. Her unpredictable anger stole their childhoods, leaving them no safe place to find shelter. The unrest at home was as disturbing as the turmoil of the country. How can a young girl escape, or even survive, such adversity and hardship?

My least favorite part of this book was the fact that it is a true story. Honestly, it was hard to read about the cruelty Ariana faced not only at home but also at school and even by the doctor! She faced fear of kidnappings and bombings on the outside and beatings while at home. She had brief respites from the fear when Papa was home, but most of the time he was away trying to earn money for the family to survive. Ariana suffered much loss—friends, family members, and dreams. I was angry that Papa was aware of the vicious behavior of his wife yet took no action to protect his children. Whether he felt powerless to change the situation or prideful to avoid disgrace, there is no excuse.

Thankfully, there are many reasons to give praise to Cry for Rain. Before reading this book, I had little to no knowledge of the Iranian Revolution of 1979. Through Ariana’s story, I learned about this piece of history—the Shah’s dictatorship, the SAVAK’s practices of torture and execution, and the shift to an Islamic Republic ruled by Khomeini. In addition, I learned about Armenian traditions related to weddings and Christmas. For example, it is tradition for a male family member to block the door and insist on payment to allow the bride to leave her family’s home.

In addition to the opportunity to expand my knowledge of history and culture, I appreciated the author’s writing style. Petrosian’s love for poetry is evidenced in her writing as she masterfully weaves similes and metaphors into the narrative. “Mom is a quiet storm brewing” and “her eyes [are] cutting daggers” as well as “dark voids of hate” are a few examples. Beyond that, the editing of the book is practically flawless. I found only one missing period in the entire book. I would only suggest adding a table of contents and removing blank pages between chapters which were present in the pdf version I read. I hope the author decides to write a sequel to document how she moves forward, how she finds the strength to forgive, and how God redeems her past.

In conclusion, I heartily award 4 out of 4 stars to Petrosian’s Cry for Rain. It’s a story not easily forgotten that raises thought-provoking questions such as “What is freedom?”. If you are sensitive to domestic violence or terrorism, you may want to pass on this one. However, I recommend it to anyone who is interested in Armenian culture, Iranian history, or anyone who enjoys stories of overcoming adversity and finding hope. This story will raise awareness of childhood abuse, increase your empathy, and elicit gratitude for the blessings you enjoy.

Cry For Rain
View: on Bookshelves

A gripping and heart-wrenching story of a young girl growing up in Iran, having to battle being a Christian in a Muslim society, enduring a mother who is psychologically unstable and violent, waiting for a father who is rarely home (and is her only saving grace), and praying day and night her home is not bombed. In so many ways, as a woman, I could relate, but NO ONE IN THE UNITED STATES has had to quake in their shoes every moment as she and her family did. We have not had a war touch this soil since the Civil War. And after surviving and being welcomed to the U.S., she not only found a way to forgive but to also take care of her mother. She is the epitome of what Jesus wants us to be and do: Love thy neighbor as thyself and to forgive one another’s trespasses as He forgives ours. I so admire her on every level. May God bless her and all those she loves (which according to her is everyone).