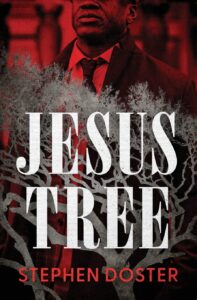 Coastal Georgia in the depths of the Great Depression.  A white minister is murdered and a young African-American man is convicted of the killing and sent to a brutal prison farm.  Forty years later, Ben Jordan finally emerges a free man, struggling to understand a world that has undergone profound change, and sets out on a mission to bring the true killer to justice.  Jesus Tree is a compelling, captivating story of a man’s search for his past and his soul – rendered vividly by a writer of unique gifts.  Stephen Doster has given us that very best thing of fiction: a rousing tale, beautifully told.

I received Jesus Tree from Goodreads Giveaways. What follows is my honest opinion of this book.

If you just read one book in 2015, let it be Jesus Tree. I had not read any of Mr. Doster’s prior books but felt I would like Jesus Tree, as the setting for this story is my home state, Georgia. I have great appreciation for the incredible amount of research that Mr. Doster did prior to writing this book, delving into the murder of the white pastor in southeast Georgia during the depression and the subsequent forty year prison sentence served by the black man who was wrongly convicted of the crime, which true event served as a basis for this story.

Beyond that though, the author spent a great deal of time in explaining the African culture of coastal Georgia, the belief system that dominated the lives of the blacks living in areas such as Sapelo Island; the culture that made Ben Jordan into the honest, god-fearing man he remained throughout his entire life.

This story was extremely well crafted and knitted together as Ben’s story is told from birth to death; the predictions made at the time of his birth and how they all played out in the following sixty years or so. The descriptions of the root doctor and his conjures to the torture Ben endured in the prison camp seemed so real I felt I could have been there. The incredible emotion as Ben finally completes his journey back to Sapelo Island and his redemption were the ultimate great ending to the story that I was expecting.

I won’t say more and spoil this book for anyone else. I can’t say enough good things about this book and I trust anyone else who spends the time with Jesus Tree will feel the same.

“From the moment I opened the book I knew it was going to be good. Stephen Doster is a master storyteller and wordsmith. He takes you through the rabbit hole to Sapelo Island, Georgia. I have had the privilege of staying there at Cornelia Bailey’s house (You can, too. Go online. She wrote God, Dr. Buzzard, and the Bolito Man: A Saltwater Geechee Talks About Life on Sapelo Island, Georgia). It was made so much more real since I had seen the area, smelled the briny marsh and walked the dirt roads on the coastal barrier island. Jesus Tree Starts out and ends there. What happens in-between is what keeps you from doing laundry and walking the dog. You do not want to stop until you find out what happens. I highly recommend this book and any of Stephen’s other works: Lord Baltimore, Voices from St. Simons, Georgia Witness, Rose Bush and Shadow Child. From the time I read Lord Baltimore, I had to have every one of them.”

Well Stephen Doster has done it again. I’ve been a fan since Lord Baltimore, his first novel, I think, but now I’m a huge fan. This is one of the most intriguing and entertaining books I’ve ever read. I’ve always been interested in the power of the root. I know people who practice the belief. Jesus Tree will take you on a journey through the Gulla/Geechie culture. Whether you’re a believer or not you will find this story spellbinding. Stephen has really done his homework. About half way through the book I had trouble sleeping. Mojo is a powerful thing and not to be taken lightly. This book is sure to be in every household in the lowlands. Beware of the conjure. I wish I could give it six stars.

Tully “Avid Reader of Only the Best”

An extraordinary look into the lives of the Geechee/Gullah community of Sapelo Island. A fascinating book I couldn’t stop reading. The life of Ben Jordan provides a fictional look into a murder in the 1930s, one that encompasses all that was unjust and brutal in the Jim Crow system of the Deep South, as well as an acknowledgement that all white people, like all black people, were not cut from the same cloth. The book also provides a telling glimpse into the colorful Georgia politics of the era. I strongly recommend this book to anyone who dares to confront the racism of the past head-on. A good read.

Stephen Doster has a #1 hit on his hands. Jesus Tree is one of the best books I have ever read. While I was reading this book I never wanted it to end. I got emotionally involved with all the characters living on Sapelo Island and the surrounding South Georgia area. I would highly recommend this book to everyone!!

This is one of the best authors of historical fiction. He brings his characters to life. Hard story to read because of the treatment of convicts in 1930s, but main character will grab your heart. Also great historical information on an African culture and beliefs.

This book conjured up old Georgia and put me squarely in it. Rich characters ring true – good versus evil – a great finish – sad the read is over.