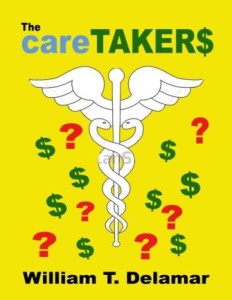 The Caretakers is good from start to finish. Be warned- Make sure you have sufficient time to read on. Once you start it is hard to put down. William T. Delmar portrays real life Management frustrations that will change your view of established medical care.

William Delamar writes a fabulous book, but the cover is nothing like the contents. This is a prime example ‘that you cannot judge a book by its cover’. A fantastic novel depicting the inside workings of an urban hospital administration under fire from political and racial groups, greedy/arrogant doctors, underpaid nursing staff, and money-hungry attorneys. On top of all that, there is an ‘angel of mercy’ roaming the halls, helping those on their way out the back door go a little faster. I could not put it down until the last word.

An engaging, exciting story of intrigue in a fast-failing hospital

William T Delamar’s fast-paced and moving hospital novel, The CareTAKERS, is like the television world of sexy lovable Dr McDreamy and grouchy brilliant Gregory House – turned on its head. At Eastern Hospital, affiliated with Eastern Medical College, most of the physicians are greedy, uncaring, careless, bigoted, and many are incompetent. The head of anesthesiology manages to kill patients during alcoholic hazes in the operating room. Their characters border on satire, but there are no smiles intended. No matinee idols, not even close.

Fortunately the less visible folks at Eastern are the salvation of both the hospital and the down-and-out community that surrounds it. Doug Carpenter is the Hospital Administrator, very much a dog to be kicked at times, but also a moral person not to be crossed when push comes to shove. Throw in a sexy union organizer-stripper and several choric elderly ladies, and you suspect from the get-go that Eastern Hospital is either going to get saved or torn apart. No way to tell, for the most part.

Only a few weeks pass during the narrative – a landmark time for the hospital because of a pending State review and a plan to build a new hospital building even as the patient count declines. The union organizer’s antics offer some eye-popping relief for a time, but then she opens the doors to the squalor and suffering of the community, which has a major effect on the outcome.

The plot is presented in a racial divide that will make some readers uncomfortable, and that may seem exaggerated to some readers – but it serves to let us know the Capulets from the Montagues, so to speak.

The book is a winner, which is not to say it does not have its flaws.

Delamar’s book is a fascinating account of hospital power politics and greedy ambition. Hospital administrator Doug Carpenter is struggling to bring Eastern Medical College out of a financial mess and into the 21st century and deal with cost overruns on a new building project. There’s no doubt the author has an “up close and personal” understanding of the turf wars that go on when massive egos are involved but, when a hospital, with which most of us will know intimately sometime in our lives is the subject, it takes on a personal urgency. The book begins with Doug’s early arrival at the office where he is greeted by the bomb squad. It seems a doctor has been storing a highly explosive chemical in dozens of glass jars in a fourth floor hallway. Events proceed non-stop with a “lost” patient in a wheelchair who has been left in a backroom overnight, rumors of patients dying prematurely, a union organizer creating uproar among the nurses, doctors fighting over fees, a teenage suicide, and on and on. Although I found the book entertaining, I couldn’t give it five stars because there was little backstory on the characters. I wanted to know more about them so I could care about them. I felt the writer was more interested in the devious political maneuvers of the characters than he was about their humanity.
There should have been more tension or more danger so I could become more emotionally involved.