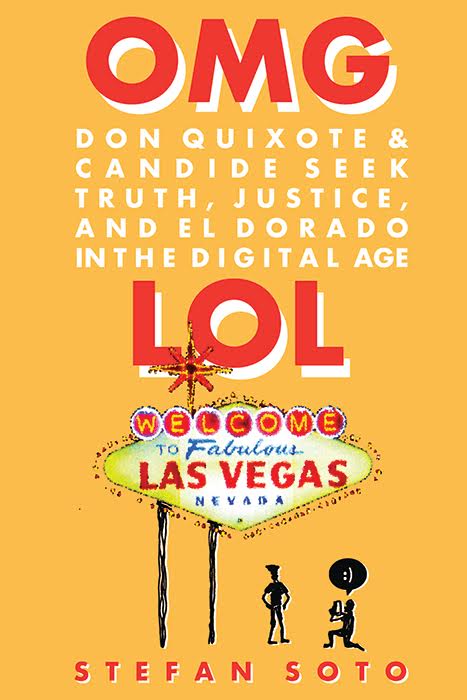 Synopsis: After years of living off their celebrity, Don Quixote and Candide join forces to seek adventure in the modern world. In this re-imagining of literary history, the two meet Cyrano De Bergerac, Merlin, Sherlock Holmes, the crew of the Starship Enterprise, Tom Sawyer, Huck Finn, Dean Moriarty, Elizabeth Darcy (nee Bennett), Mr. Darcy, and multitude of historical figures, and share unexpected encounters with people from their past.

While Don Quixote remains rooted in days of yore, Candide is preoccupied with exploiting all things modern.

It is interesting to note that author Stefan Soto was raised by a Romani Princess and a Ukrainian circus performer. He resides on an English Canal and has no known address. His early works were banned by most right-thinking European powers. Stefan also invites his readers to investigate Cervantes’ and Voltaires’ original treatments of the title characters.

Don Quixote and Candide Seek Truth, Justice, and El Dorado in the Digital Age is fanciful, intelligent entertainment, better sipped than gulped to enjoy the full effect.
The picaresque novel gets a fresh spin in Stefan Soto’s time-twisting tale, Don Quixote and Candide Seek Truth, Justice, and El Dorado in the Digital Age.
Candide and Don Quixote, characters in books a hundred years apart, are very much alive when they meet by chance in tavern. Both mourn the fact that their great adventures are behind them, and decide to embark together on a final, bold journey—a search for the truth.
Soon they are on the road, bound by rail and sea for the New World, otherwise known as America. This is, however, no ordinary journey, for it traverses not only distance but also the infinite. Time has no boundaries, cell phones coexist with pirates, and the next text message might be from Sherlock Holmes.
The book is narrated by Candide, whose voice is pitch-perfect for Voltaire’s creation. Always susceptible to female charms, Candide also keeps a blog and is quick to embrace the wonders of technology. Don Quixote is also well drawn as an idealistic and melancholy knight dreaming of great deeds that will never come to pass. It’s a major achievement that these characters’ voices, though from different eras, are simultaneously clever, archaic, and appealing to contemporary ears.
As the journey unfolds, it draws in other familiar characters from the classics, all true to their originals, but all in slightly altered roles. They include Dr. Watson, Holmes’s right-hand man, who now has a syndicated television show; Cyrano de Bergerac as a forlorn railroad conductor; and Tom Sawyer and Huck Finn, who run a not-quite-honest salvage business. The structure of the book is episodic, and as these characters and a host of others are introduced and bid farewell, the pace is swift.
The writing is unfailingly clever, with many rewards for those well-versed in the classics and history—as when Don Quixote explains that he invented anagrams while standing in long lines during the Franco era. Though echoes of Cervantes and Voltaire’s original works are heard, recent reading isn’t necessary; Candide and Don Quixote both adroitly fill in the blanks by recounting their histories at the hands of their respective “biographers.”
Contemporary culture is also in play, as the quest for truth leads the adventurers to contemporary Las Vegas, and brings in the crew of the original Star Trek to shed light on the latest developments in time travel.
The swift pace slows with the introduction of Elizabeth Bennett, held captive by Long John Silver.  Candide is instantly infatuated with the heroine of Pride and Prejudice, and volunteers to undertake her rescue, even though it means reuniting her with her true beloved, Mr. Darcy. This subplot goes on a bit too long and blunts the more interesting plot thread of whether and how Candide and Don Quixote are going to make their ways back to their own time zones.
Don Quixote and Candide Seek Truth, Justice, and El Dorado in the Digital Ageis fanciful, intelligent entertainment, better sipped than gulped to enjoy the full effect.
__________________________________________________________________________

Time travel, spaceships, and a wizard with a grudge.

Did you know? Every time you make an Amazon purchase from one of my links, you’re supporting this site.

Don Quixote & Candide Seek Truth, Justice, and El Dorado in the Digital Age, by Stefan Soto (a.k.a. Stephen Doster) is a work of pure genius. Told entirely from Candide’s perspective, this book is full of wit and irony (a word whose meaning is debated several times by key characters). This is the perfect read for those well-versed in classic literature, but even those without that background will find this story entertaining.

Personally, I couldn’t stop myself from bursting out laughing at several scenes in the book. And the plot is well-crafted, too. I gasped several times as an unexpected twist unfolded or a new obstacle presented itself before our intrepid adventurers. (Okay, so maybe Candide wasn’t always all that intrepid.)

Part of what makes this novel magical is how deftly Soto/Doster weaves characters from other stories together.

If you’re searching for a book with amazing characters, a stellar plot, and hilarious shenanigans, this is the book for you.