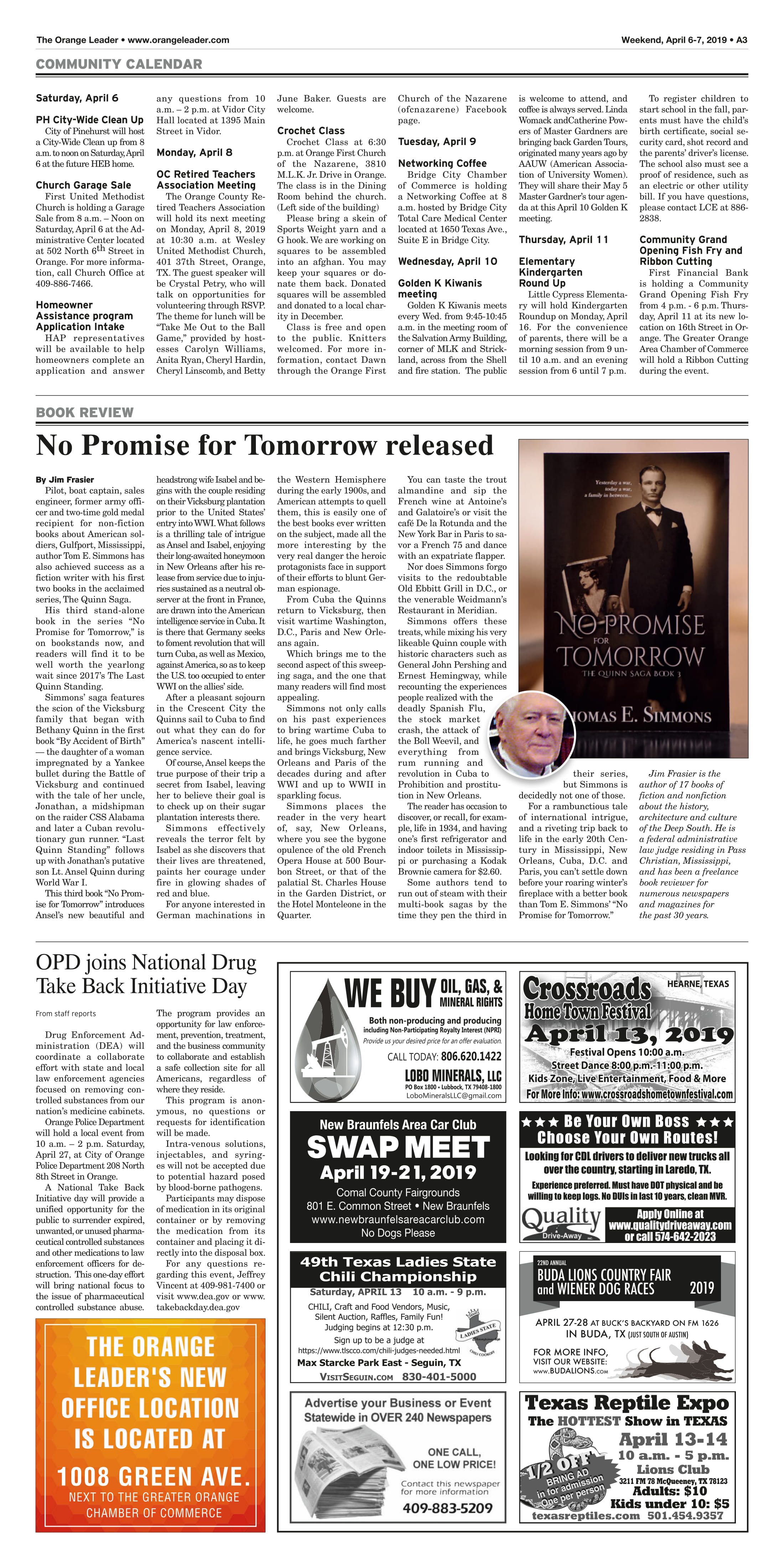 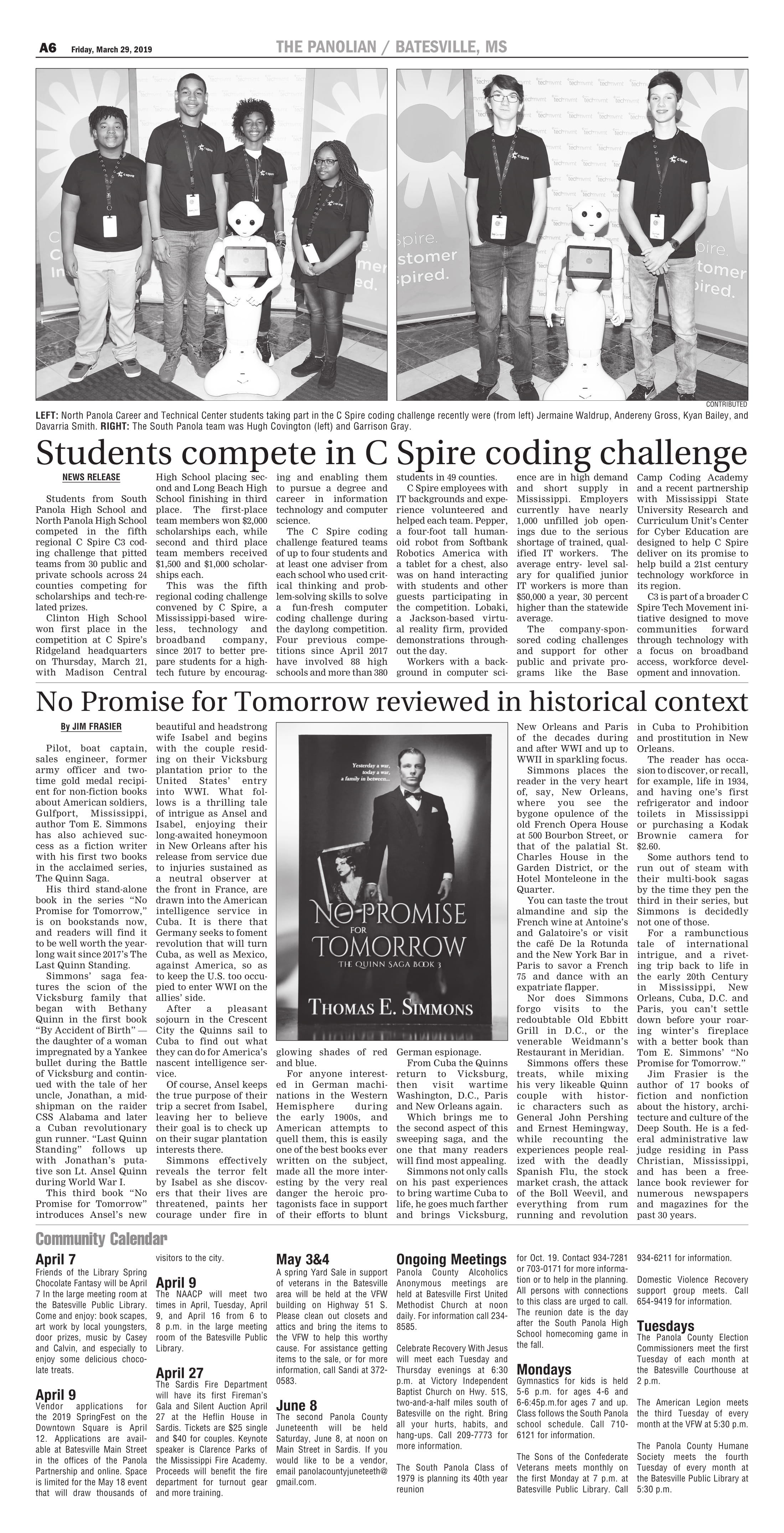 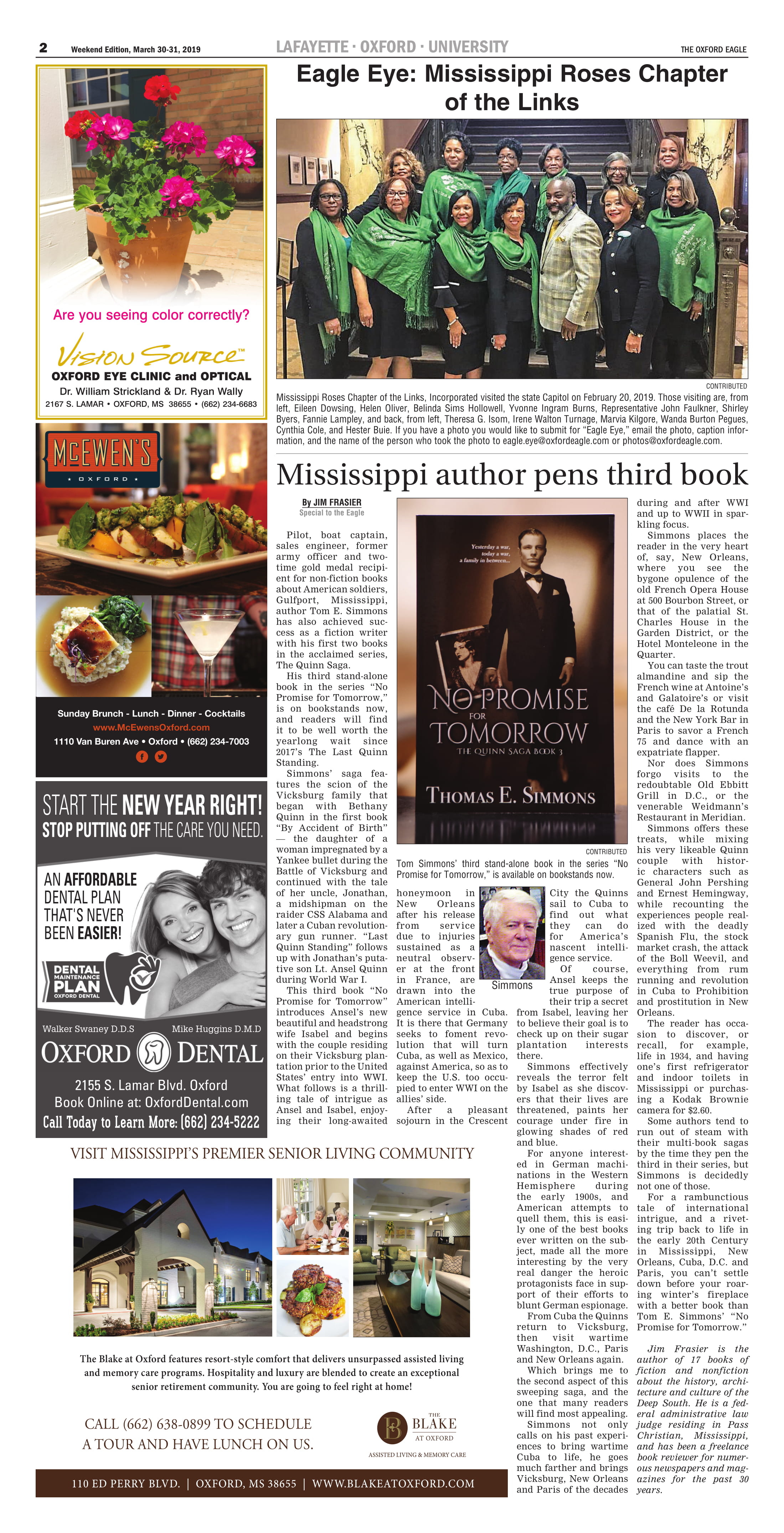 Amazon Reviews No Promise for Tomorrow By Thomas E. Simmons Review by Jim Fraiser Pilot, boat captain, sales engineer, former army officer and two-time Gold Medal recipient for non-fiction books about American soldiers, Gulfport author Thomas E. Simmons has also achieved success as a fiction writer with his first two books in the acclaimed series, The Quinn Saga. His third stand-alone book in the series, No Promise for Tomorrow, is on bookstands now, and readers will find it to be well worth the year long wait since 2017’s The Last Quinn Standing. Simmons’ saga features the scion of the Vicksburg family that began with Bethany Quinn in the first book, By Accident of Birth, the daughter of a woman impregnated by a Yankee bullet during the Battle of Vicksburg, and continued with the tale of her uncle, Jonathan, a midshipman on the raider CSS Alabama and later a Cuban revolutionary gun runner. The Last Quinn Standing follows up with Jonathan’s putative son, Lt. Ansel Quinn, during World War I.  This third book, No Promise for Tomorrow, introduces Ansel’s new beautiful and headstrong wife, Isabel, and begins with the couple residing on their Vicksburg plantation prior to the United States entry into WWI. What follows is a thrilling tale of intrigue as Ansel and Isabel, enjoying their long-awaited honeymoon in New Orleans after his release from service due to injuries sustained as a neutral observer at the front in France, are drawn into American intelligence service in Cuba. It is there that Germany seeks to foment revolution that will turn Cuba, as well as Mexico, against America, so as to keep the U.S. too occupied to enter WWI on the allies’ side. After a pleasant sojourn in the Crescent City, the Quinns sail to Cuba to find out what they can do for America’s nascent intelligence service. Of course, Ansel keeps the true purpose of their trip a secret from Isabel, leaving her to believe their goal is to check up on their sugar plantation interests there. Simmons effectively reveals the terror felt by Isabel as she discovers that their lives are threatened and paints her courage under fire in glowing shades of red and blue. For anyone interested in German machinations in the Western Hemisphere during the early 1900s, and American attempts to quell them, this is easily one of the best books ever written on the subject; made all the more interesting by the very real danger the heroic protagonists face in support of their efforts to blunt German espionage. From Cuba, the Quinns return to Vicksburg, then visit wartime Washington, D.C., Paris, and New Orleans again. Which brings me to the second aspect of this sweeping sage, and the one that many readers will find most appealing. Simmons not only calls on his past experiences to bring wartime Cuba to life, he goes much farther and brings Vicksburg, New Orleans, and Paris of the decades during and after WWI and up to WWII into sparkling focus. Simmons places the reader in the very heart of, say, New Orleans, where you see the bygone opulence of the old French Opera House at 500 Bourbon Street, or that of the palatial St. Charles Hotel in the Garden District, or the Hotel Monteleone in the Quarter. You can taste the trout almandine and sip the French wine at Antoine’s and Galatoire’s, or visit the café De la Rotunda and the New York Bar in Paris to savor a French 75 and dance with an expatriate flapper. Nor does Simmons forgo visits to the redoubtable Old Ebbits Grill in D.C. or the venerable Weidman’s Restaurant in Meridian. Simmons offers these treats, while mixing his very likeable Quinn couple with historic characters such as General John Pershing and Ernest Hemingway, recounting the experiences people realized with the deadly Spanish Flu, the stock market crash, the attack of the Boll Weevil, and everything from rum running and revolution in Cuba to Prohibition and prostitution in New Orleans.  The reader has occasion to discover, or recall, for example, life in 1934, and having one’s first refrigerator and indoor toilets in Mississippi, or purchasing a Kodak Brownie camera for $2.60. Some authors tend to run out of steam with their multi-book sagas by the time they pen the third in their series, but Simmons is decidedly not one of those. For a rambunctious tale of international intrigue, and a riveting trip back to life in the early 20th Century in Mississippi, New Orleans, Cuba, D.C., and Paris, you can’t settle down before your roaring winter’s fireplace with a better book than Tom E. Simmons’ No Promise for Tomorrow.