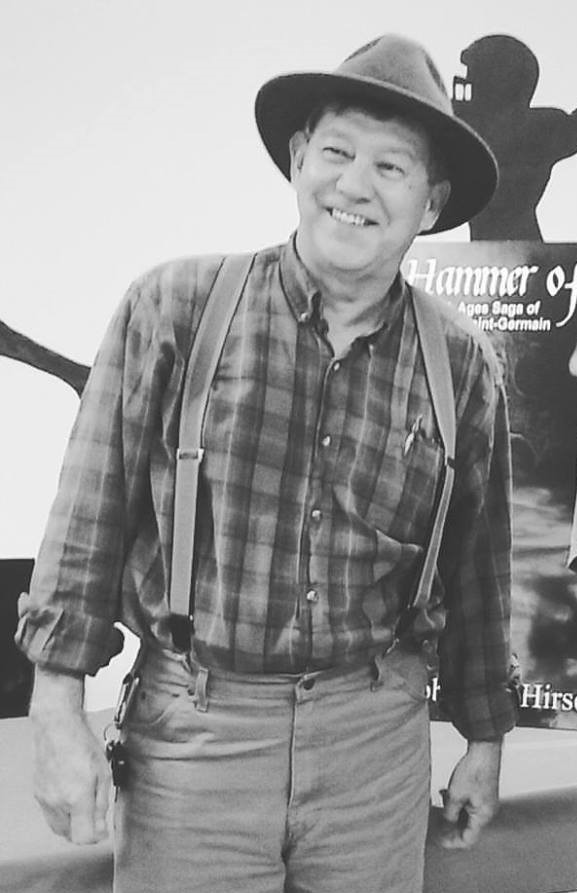 Robert E. Hirsch retired in 2012 as the Superintendent of the Ocean Springs School District along the Mississippi Gulf Coast where he now resides with his wife, Melissa Hirsch. After forty years in education (both public and private), he chose to realize his college dream: writing historical fiction erupting with action and intrigue while also unearthing readers’ deepest emotions and personal angst as concerns the human heart.

Having experienced his own adversities concerning racial stigmas, nationality, and Catholic doctrine, Hirsch writes with distinct accuracy of the walled façade individuals construct to insulate themselves against others and the terrors of life no less formidable than those constructed by powerful and established institutions. According to Hirsch, “We are all caught, at times, in raging currents that strip us of our ability to fight or overcome circumstance. Does one then surrender, or take on a battle beyond all odds… leaving hope as the sole and final ally?”

Hirsch’s first novel was Contrition (JournalStone, 2012), but has since authored the five-book series: The Dark Ages Saga of Tristan de Saint-Germain, which includes: Promise of the Black Monks (e-book, print, audio), Hammer of God, A Horde of Fools, God’s Scarlet Fury, and Cup of Blood…Bread of Salvation, all published by Argus Publishing and represented by Loiacono Literary Agency. 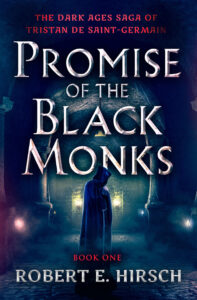 Promise of the Black Monks audio book on Audible

When Tristan Saint-Germain and his brother, Guillaume are sent to live with the Black Monks in Cluny, they had no idea their fates…nor that those whom they are destined to encounter would change the history of the world.

Born of nobility in France in the year 1066, the fate of seven-year-old Tristan de Saint-Germain is thrown to the winds upon the execution of his father for treason against William the Conqueror of Normandy. Then, abandoned by his mother who remarries and departs for England, Tristan and his four-year-old brother, Guillaume, find themselves thrown into the monastic world of the Benedictine Black Monks of Cluny, France. Under the tutelage of Grand Prior Odo de Lagery, who one day will ascend to the very pinnacle of power within the Catholic Church in Rome, Tristan develops into an academic and linguistic prodigy by the age of twelve and becomes known as the ‘Promise of the Black Monks’.

Tristan’s unusual talents become useful to the Benedictines as well as to Rome, and the boy soon finds himself pulled into the visceral power struggle between Pope Gregory VII and Emperor Heinrich IV as they mercilessly wage spiritual, political and military war upon each other to claim supremacy over the continent of Europe. 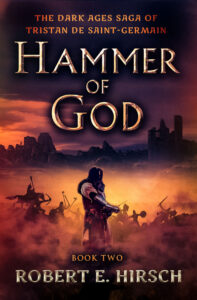 The sequel, Hammer of God, takes you on Tristan’s journey from the time he becomes a Black Monk of Cluny and a spy for the Pope, to the dawning of the crusades in 1097; an epic tale that leaves you wanting more. Vows were taken, loyalties were chosen and now he must use all his gifts to protect the Pope and serve God. To what lengths, in what ways?

That the most cataclysmic events in history are often engineered by men of decent heart in the name of righteousness is a bloody testament to both the blinding power of misguided conviction and the ignorance of the masses.  Such was the wellspring of the Crusades, a murderous rampage of hatred and intolerance that bared its ugly fangs at the end of the 11th Century, and whose venom lingers within us to this very day.

Tristan’s journey continues from the time he becomes a Black Monk of Cluny and a spy for the Pope, to the dawning of the crusades in 1097; an epic tale that leaves you wanting more.

“Ah,” cried the Hermit, “I told that boy he was dangerous, that he would plant the seeds of war!”

“Yee-hee-hee!” cackled Duxia in reply, “and I told him he was cursed at birth… and even asked him what it is he wanted, and how many would die as he strived to seek it!” 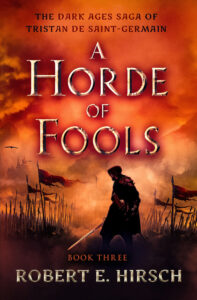 A Horde of Fools Reviews

Henry IV requests mediation from Matilda of Tuscany and Abbot Hugh of Cluny.

The third in the series, A Horde of Fools, gets Tristan tangled up in Peter the Hermit’s Peasant’s Crusade where over 50,000 peasants marched from France to Byzantium to fight the Turks and recover the Holy Land from the Muslims. Flanked by the Danes and his brother, Guillaume, and watched over by an earthly angel and the love of his life, Mala, he is determined to do what God and the Vatican ordained him for — to save the innocent from certain annihilation on their march to Jerusalem.

History comes alive in this epic tale through the decisions, actions, and struggles of Pope Urban II, Peter the Hermit, the sadistic peasant warriors with crosses branded on their foreheads known as Tafurs, the elfin spy named Fazio, Emperor Alexius Comnenus Of Byzantium, Lord Dulac and his English/Norman miscreant contingent and the blood-lusting Turkish commander known as Mahmoud Malik, The Butcher of Medina. 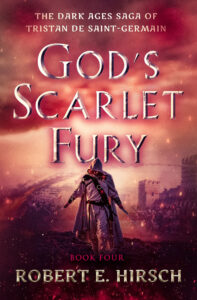 This ia a map of the Crusade route of 1096 of which the Crusaders took the overland route from all parts of Europe to Constantinople, then on to Jerusalem.

This is the fourth novel in the continuing saga of Tristan, Mala, Guillaume and the Danes which covers the outbreak of the First Holy Crusade in the wake of the fiasco of Peter the Hermit’s Peasant’s Crusade.

As the violent warrior class of Western Europe attacks the Turkish Empire at the bidding of Pope Urban II in the year 1097, Asia Minor and the Middle East ignite into a simmering inferno of war, betrayal, and political intrigue as Christians and Muslims grapple for control of the Seljuq Empire and the Holy Land. Caught in this vicious struggle, young Bishop Tristan De Saint-Germain strives to balance his religious vows, his loyalty to the pope, and his lifelong love for Mala the Romani, a beautiful gypsy whom he met as a child while traveling to enter the Monastery of the Black Monks in Cluny, France.

In the midst of this violent political and military upheaval, a nine-year-old Greek boy, Christos Laskaris, and his aging but irascible grandmother find themselves fleeing for their lives after the slaughter of their family and village by the black-bannered renegades of Mahmoud Malik. Hoping to gain sanctuary in Byzantium, they take on a 600 mile journey on foot under cover of darkness, fighting starvation, the elements, roving marauders, and execution.

In the end, the two are unable to avid the colossal confrontation that awaits them all. 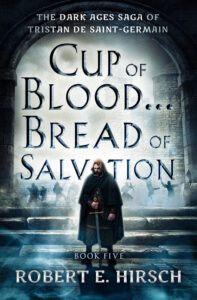 Cup of Blood…Bread of Salvation Reviews

The fifth and final volume in the The Dark Ages Saga of Tristan de Saint-Germain Saga.

In 1097, Pope Urban’s Army of God confronts the great Oriental city of Antioch, its final obstacle before reclaiming Jerusalem from the hammer of Islam. But Antioch is defended by the wily Turcoman, Emir Yaghi Siyan, and is coveted by the atabeg of Mosul, Kerbogha.

After overcoming a tortuous trail rooted during childhood of impossibility, separation, and heartbreak, Bishop Tristan de Saint-Germain and Mala the Romani finally stand at the precipice of a new life together. But Antioch snares them both, forcing Tristan to decide between honoring his ‘father’ in this life, Pope Urban II, or abandoning Catholicism forever in favor of exile with Mala in the Middle East. Showing up unexpectedly in the midst of this crucible, honorable Lord Abdul Azim and murderous Mahmoud Malik create further complexities… thus bringing together in one final episode all the primary characters of the Dark Ages Saga of Tristan de Saint-Germain, including Peter the Hermit, treacherous Desmond DuLac, Tafur the Peasant Butcher, and Bishop Adhémar of Le Puy.

Shall the forces of God prevail, or those of Allah? 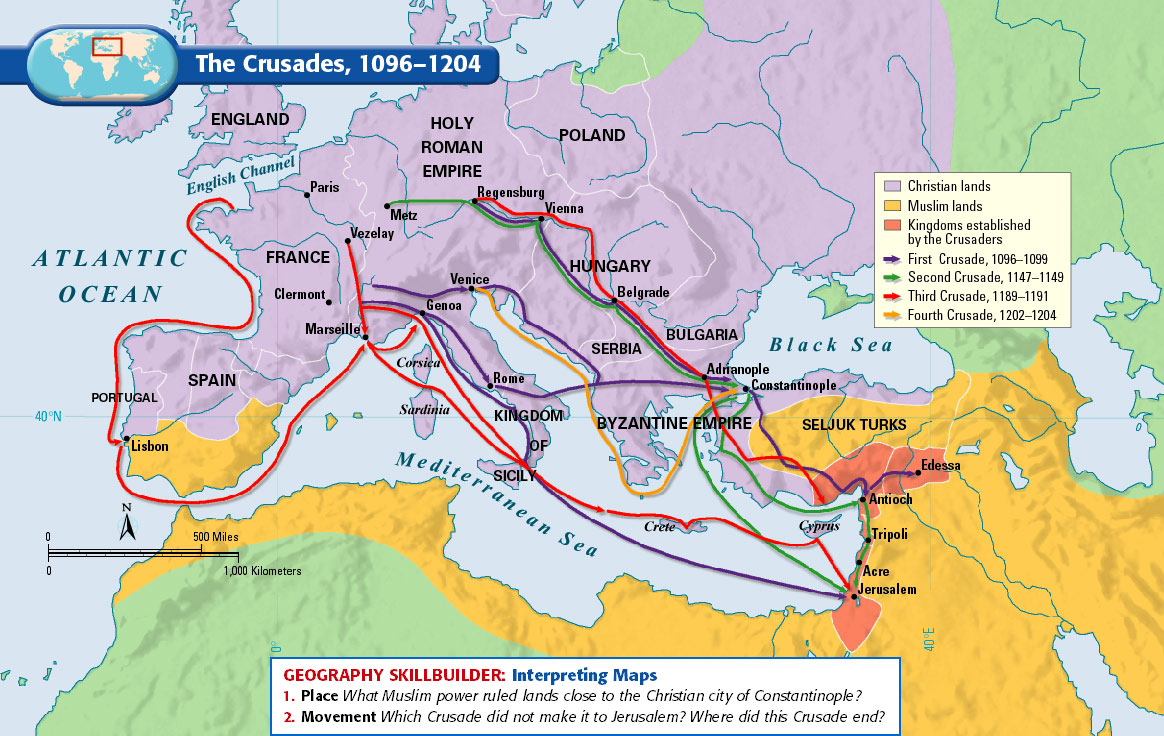 Loiacono Literary Agency is not responsible for the scheduling of authors, negotiations, or fees associated with the speaking engagements. You may contact the author directly to check availability@rhirsch@ossdms.org .