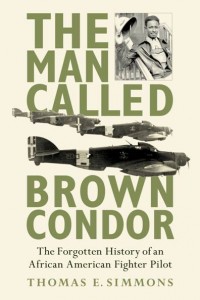 Tom Simmons was called to the Jackson, Mississippi State Capital Building, directed to the Senate chambers in full session and given the following honor.

Simmons was deeply honored and humbled by the following award, and by the fact that after an acceptance talk, in which he got a little emotional over John Robinson, he received a standing ovation by the entire Senate.

(As Adopted by Senate and House)

A CONCURRENT RESOLUTION RECOGNIZING MISSISSIPPI AUTHOR THOMAS E. SIMMONS AND THE LEGACY OF COLONEL JOHN CHARLES ROBINSON OF GULFPORT, MISSISSIPPI, WHO IS THE SUBJECT OF HIS BOOK THE MAN CALLED BROWN CONDOR:  THE FORGOTTEN HISTORY OF AN AFRICAN AMERICAN FIGHTER PILOT.

WHEREAS, THE MAN CALLED BROWN CONDOR:  THE FORGOTTEN HISTORY OF AN AFRICAN AMERICAN FIGHTER PILOT is an unlikely story about a Mississippi aviator, told well by Author Thomas E. Simmons, who researched his subject for 3 decades, and now he has put it all together in a narrative that reads like a novel; and

WHEREAS, John Charles Robinson was born in 1903 in Florida and grew up in a very segregated South.  His father died in an accident shortly after he was born.  His mother moved with him and his sister to Gulfport, Mississippi.  In 1910, when John was 7, he saw his first aircraft, a float plane that taxied to the beach.  John Robinson knew that he wanted one day to fly an airplane, and he set out to overcome the obstacle of segregation.  He did this by learning to excel at school and later at work, to never let disappointments overcome his determination and to wear his successes with modesty.  A loving family buttressed his good nature and self-confidence; and

WHEREAS, for college, he enrolled in the Tuskegee Institute and learned to become an automobile mechanic.  He decided there would be better job opportunities in the North, so he moved to Detroit.  He earned a reputation as an exceptionally good mechanic.  Moving to Chicago, he wanted to enroll in the Curtiss-Wright Aviation School, but black students were not welcome.  Although he had a full-time job in an auto garage, he signed on as a nighttime janitor in a Curtiss-Wright classroom, absorbing the instructor’s ground-school lectures.  The instructor realized how determined John was and persuaded the school to let him enroll; and

WHEREAS, John went on to form a small flying school, encouraging young black men to enroll.  This fact came to the attention of Haile Selassie, Emperor of Ethiopia, who was working to modernize his country.  He invited Robinson to come to Africa to head his Air Force.  Much of the book is devoted to this personal adventure.  As the threat of an invasion by Mussolini’s Fascist Italy grew, Robinson built a cadre of black pilots and ground crews.  Unarmed, the small fleet of airplanes could perform one essential task in a country with primitive lines of communication:  ferry messages back and forth between the front lines and the Emperor’s general staff in the Capital, Addis Ababa.  The author gives us a “you-are-there” feeling as Robinson and his pilots navigate the difficult terrain of Ethiopia, dive into clouds to elude Italian pursuit aircraft, and take off and land under hazardous conditions.  Then-Colonel Robinson also witnessed Italian aircraft spraying mustard gas on thousands of Ethiopian ground troops; and

WHEREAS, word of Robinson’s exploits came back to America, first to black communities and newspapers, then to the general press.  His dream of making it possible for many young black men to become flyers came true.  Briefly, he was nationally famous.  Ultimately, the Italians conquered Ethiopia, but only temporarily.  Selassie escaped to England and John Robinson to America.  Back home, his aviation school thrived.  Tuskegee, to which had he proposed an aircraft school in the 1930s, finally had one and turned out hundreds of the famous Tuskegee Airmen, who gained fame in World War II; and

WHEREAS, after the war, Selassie invited Robinson back to Ethiopia, first to rebuild his Air Force, then to create Ethiopian Airlines.  As with everything else this remarkable man did in his short life (he died at age 51), he performed these jobs with determination and thoroughness.  His lifelong triumph over adversity belongs to the greatest of American success stories; and

WHEREAS, Thomas E. Simmons is the author of four books to date:  The Brown Condor, Escape from Archangel, Forgotten Heroes of World War II and his latest, The Man Called Brown Condor.  He grew up in Mississippi, attended Marion Military Institute, the U.S. Naval Academy, the University of Southern Mississippi and the University of Alabama.  He served as commercial Captain of a 70-foot sailing vessel, has been a pilot since the age of 16, has flown professionally, and participated in airshows flying aerobatics in open-cockpit biplanes.  In 1960, he served as an Artillery Officer in Korea.  He has traveled the world; and

WHEREAS, thanks to the United States and brave pilots like Colonel Robinson, colonialism was defeated in Ethiopia; and it is with great pride that we bring attention to this Mississippi Author and the subject of his excellent book:

NOW, THEREFORE, BE IT RESOLVED BY THE SENATE OF THE STATE OF MISSISSIPPI, THE HOUSE OF REPRESENTATIVES CONCURRING THEREIN, That we do hereby recognize Mississippi Author Thomas E. Simmons and the legacy of Colonel John Charles Robinson of Gulfport, Mississippi, who is the subject of his book The Man Called Brown Condor:  The Forgotten History of an African American Fighter Pilot, and extend our best wishes to Mr. Simmons for his continuing literary contributions.

BE IT FURTHER RESOLVED, That this resolution be presented to Thomas Simmons, forwarded to the Mississippi Arts Commission, and be made available to the Capitol Press Corps.

The resolution was signed by the following:

Philip Gunn, Speaker of the House of Representatives