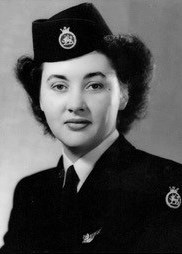 How do you sum up a life in that little dash between birth and death? Marjorie Catherine Terry-Smith Doster, or Terry as she liked to be called, went on to join her Lord and Savior on the 27th of February, 2020.

Born in London, England on August 13, 1923, Terry grew up steadfast and fearless in the face of adversity. She attended the Wimbledon School of Art in South West London and studied theatrical design. During World War II, she survived the London Blitz of 1940 and went on to serve the Women’s Auxiliary Air Force (WAAF) as a Radar Operator “Plotter” at eight different RAF stations including RAF Tangmere and RAF Ford. Post-war, Terry flew as an Air Hostess for BOAC, the forerunner of British Airways, and was also employed at the British Broadcasting Corporation (BBC). Smitten by the southern charm of CDR George P. Doster, USN (of Moultrie, GA), she fell in love, and married him in 1953. The Doster family moved to Saint Simons Island, GA in 1963 where Terry dedicated her life to raising her beautiful family and enriching the community. Mums, Gemma as she was known by many, was a committed member of Christ Church Frederica and was beloved by all who knew her. She is especially cherished by her children: Sarah Hassinger (Jack); Jonathan Doster; Nicholas Doster; Stephen Doster, and Charlotte Doster. Her grandchildren: Sarah Dorrance (John Thompson); Andrew Doster; George Dorrance (Lauren); Stephen Dorrance; Jorie Doster, and Emily Doster; (as well as her feline constant companion of 17 years, Popsie). All of whom will carry the memories of their loving matriarch, a woman who spoke her mind – even to the likes of Winston Churchill.

Terry was predeceased by her husband George; her sister, Sylvia Schofield; and her parents, Anne Terry and William Horace Smith.

Our “Queen of St. Simons Island”, she had the spirt and tenacity of a lioness and was truly a treasure. We will miss her good, strong cuppas, fairy cakes, and amazing stories of a life well lived. Fly high, Darling. We love you.