Why People Do What They Do by Emilio Iaseillo 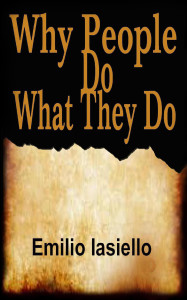 Pawnshops have always held a certain fascination for me.

Pawnshops are dirty places. Pawnshops are indecency at its finest.  They are where people surrender their most precious objects, and in doing so, surrender a part of themselves.   Sometimes they reclaim their valuables, mostly they don’t.  Some never reclaim their dignity.

Pawnshops have so many things:

After college, a close friend of mine from high school lived above an open 24-hour pawnshop as he was trying to figure out what to do with his life.  At nights, I’d go over with a bottle of bourbon and we’d listen to music.  Sometimes we’d go down and look at the things for sale.  The people that were there always seemed to be nervous, twitching with discomfort and never making eye contact.

I love these places.  Each object tells a story. Some are obvious stories.  A widescreen television hocked in favor of making that month’s rent.  A computer sold to fund a vacation or trip.  But some are not so easy.  Some are personal.  And it’s in these objects where stories are told.

One night I saw a middle-aged woman giving up her pearl earrings for a fifty-dollar bill.   A kid a year or two removed from college sold his laptop for a hundred bucks.

It made you wonder what brought them to this place at this hour.  What was it that was broken that could only be fixed by giving something of yourself knowing that there was little chance of getting it back?  Because if selling a part of you is bad, buying a piece of someone else is even worse.

A month after my friend moved out of that apartment a person who bought a knife from that pawnshop committed a robbery in which he stabbed and killed his victim.  When the owner was asked why he thought the thief committed such a heinous crime, he replied:

Who knows why people do what they do?